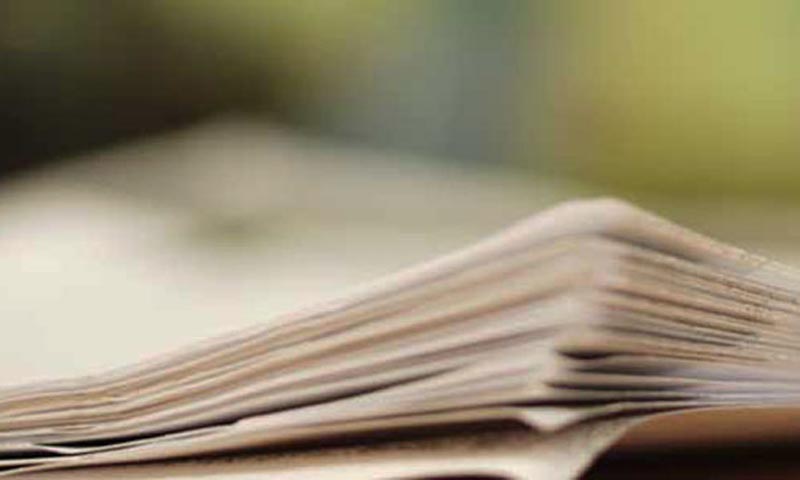 ISLAMABAD: Journalist associations across Pakistan Tuesday warned the government against adopting delaying tactics to meet their demands and made a categorical pledge that if transmission of Geo News and ARY Television was not fully restored in all parts of the country then they would also set up protest camps in front of the national and provincial assemblies.

A large number of journalists visited the protest camps set up in front of press clubs all over the country and chanted slogans like “One Country: Two Laws”, “Shame on Pemra”, “Eliminate No-Go Areas” and “Rein In Cable Operators”. They recited poems and sung songs in favor of freedom of press.

Senior journalists, politicians and the members of civil society organizations continued to visit these camps and showed solidarity with the journalists who have been raising voice against unjust and illegal acts of Pemra and some cable operators who are not following the court verdicts.

Pakistan Federal Union of Journalists (PFUJ) President Afzal Butt while speaking at the protest camp in front of the National Press Club (NPC) said if the government does not take action against the illegal acts of cable operators then the movement to protect freedom of press would move forward with more vigor and momentum in the coming days.

He said there was a devious scheme of pitching the localmedia houses against one another but now journalists had realized that division among them would serve no purpose and they should join hands to eliminate no-go areas for Geo News and Jang and The News newspapers.

“Federal information minister asked PFUJ to end its protest campaign but it categorically rejected his suggestion and made it clear that it would be stopped only when the government takes necessary action against Pemra,” he said.

NPC President Sheheryar Khan said political parties make tall claims of freedom of press but when they come into power they forget their pledges and continue the policies of curbing media to hide truth from the common people.

NPC Secretary General Tariq Chaudhry said copies of Jang and The News were burnt on a number of occasions but it seems there is no one to investigate these incidents and arrest the culprits behind this crime.

Rawalpindi Islamabad Union of Journalists (RIUJ) Secretary General Bilal Dar said Geo News had been pushed back to last numbers by the cable operators in various cities but the government was still hesitant to take any step in this respect.

“Why the government is acting like a silent spectator and not taking action against those cable operators who are still not ready to restore Geo News and other channels to their original numbers,” he said.

Khyber Union of Journalists (KhUJ) President Nisar Mehmood and Peshawar Press Club President Nasir Hussain said attempts to gag the free media were detestable because media retains the right to be critical and any law infringing on that right and attempting to regulate the media is nothing less than an attempt to bring back the anti-democratic days of the military dictators.

President Sukkur Press Club Lala Asad Pathan while addressing the journalists said they had rendered great sacrifices to earn the freedom of press so the journalist community would foil any attempt to undermine the role of media in the country.

Karachi Press Club (KPC) President Imtiaz Faran said an independent media was a must in a democratic society so the government should take steps to end discrimination against and ensure that all media groups work independent of the state institutions pressure.

Our Peshawar Bureau adds: The protest by the journalists against the blacking out of the transmission of Geo Entertainment and a private TV channel continued for the fourth consecutive day on Tuesday.

They said the Pakistan Electronic Media Regularity Authority imposed curbs on the media, but the authority failed to restore the transmission of Geo TV after the completion of the 15-day suspension period.

They said that hundreds of people were associated with the media channels and shutting them down would render many people jobless. They vowed to intensify the protest if the ban was not lifted.

Our correspondent adds from Lahore: The protest against curbs on channels and newspapers continued here Tuesday in Lahore.

A large number of journalists, members of civil society, lawyers, representatives of political and religious parties, and common citizens participated in the protest camp, set up in front of the Lahore Press Club by the Pakistan Federal Union of Journalists, led by Afzaal Butt, and the Council of Pakistan Press Clubs, led by Arshad Ansari.

The participants called for unity among the media houses to safeguard the freedom of expression earned after hard struggle of the entire community. The participants in large numbers, carrying placards inscribed with slogans in favour of the media freedom, gathered at the protest camp and vowed to foil every conspiracy hatched against the press freedom.

The speakers said Geo News was not restored completely until now and all channels of Geo family were also pushed back from their original numbers on the cable even after 15-day suspension by the Pakistan Electronic Media Regulatory Authority (Pemra). They demanded the government stop such discriminatory steps, taken against the most favourite channel of the country.

The participants also criticised those who were making hurdles in the distribution of the Jang Group newspapers. Bedar Bakht Butt, in his address, said Jang/Geo is being punished for raising the voice of truth and for fighting the cause of common man. He said hurdles are being created in the distribution of Jang and The News. But, he warned, the whole journalist community would fight against this nefarious design, aimed at damaging the largest media house of the country. He said the journalist community would continue its efforts for the freedom of press and freedom of expression.

Rana Muhammad Arshad said the media, particularly the Jang Group, had played a key role in strengthening democracy and earning media freedom in the country. He said the role of media was very crucial in the ongoing war against terrorism adding the government would continue supporting media freedom, which is very essential for democracy also.

Arshad Ansari said journalists were not fighting for Jang or Geo but for the press freedom and freedom of expression earned after hard efforts of the journalist community. He called upon all media houses to show unity at this crucial time as the media freedom was under grave threat. He said incomplete restoration of Geo is a clear sign that there is no rule of law in the country even in a democratic era. He said the camp would go on till complete restoration of all TV channels.

Arshad said journalists affiliated with different print and electronic media houses could play an important role for the common cause. Waseem Farooq said Pemra should follow the rules and procedures and act on the decisions of the courts and if it does not do so, then the incumbent government should take stern action against those who are responsible.