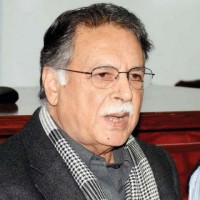 ISLAMABAD: Minister for Information, Broadcasting and National Heritage Senator Pervaiz Rashid Tuesday said that the journalists and security forces had made great sacrifices in the fight against terrorism by laying down their lives.

Addressing the participants of a journalists organizations’ sit-in here in front of the Parliament House, he said without the sacrifices of security forces, journalists and media workers the year 2015 could not had been made safer than the year 2013.

He said Operation Zarb-e-Azb was enjoying the support of media too. The war against terrorism was being fought with the power of pen and gun. Their enemy is common and the war would continue till complete elimination of terrorism. Attacking any media person or law enforcer amounts to attacking all of them.
Peace in the country was impossible without complete elimination of terrorism, he said

Media, he said was the fourth pillar of the state. Attacking journalists is tantamount to attacking the entire state, he added.
Prime Minister Muhammad Nawaz Sharif immediately after assumption of his office, underlined that elimination of terrorism was his top priority. The Prime Minister and Chief of Army Staff had also acknowledged the sacrifices of journalists in war against terrorism.

The National Action Plan (NAP), Zarb-e-Azb, media and every institution was playing its role in elimination of terrorism, he said.

Pervaiz said the state was duty bound to provide safe and secure environment to media persons in performance of their duty.

He said people should strongly condemn terror incidents in their respective areas and take out huge rallies to disseminate strong message to terrorists that nobody liked such abhorable acts.

He agreed with the suggestion that a special compensation package should also be announced for the martyred journalists in line with martyrs of security forces.
The government would announce special package for journalists in consultation with all stakeholders, he added.

He said the services of special prosecutors would be provided to journalists for pleading the cases of martyred journalists. The government is determined to completely eliminate the menace of terrorism, he added.

A committee headed by Interior Minister Chaudhry Nisar Ali Khan had also been formed for the security of media houses, he said.

A meeting would soon be held in consultation with stakeholders concerned to review security arrangements. The provinces had also been asked to beef up security of media houses.