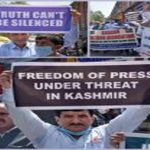 Srinagar: In occupied Kashmir, dozens of journalists staged a protest demonstration in Srinagar against crippling restrictions, imposed by India on Kashmiri journalist fraternity in the name of new media policy.
The journalists gathered under the banner of ‘J&K Media Guild’ outside Press Club in Srinagar and demanded immediate rollback of the so-called policy.
Carrying banners that read ‘Don’t Gag Media’ and ‘Down with Media Policy 2020’ the protesters shouted slogans against media restrictions in the territory.
‘The new media policy is aimed at gagging journalists in Kashmir. The framers of the policy must understand that we are a pillar of democracy and importantly as equally as three other pillars,’ they said.
‘The media policy is against all newspapers, news channels and all other news platforms. The policy makes it binding a report to inform the authorities and police before filing a story,’ said a protester, Imtiyaz Ahmad, adding, ‘In case one fails, his newspaper registration will be canceled; FIR will be filed against him or government advertisements will be barred.’
The protesters demanded an immediate rollback of the policy. ‘We don’t want to be a mouthpiece of the government. The government must revoke and rollback this policy so that we get a free atmosphere to carry on with our job.’
Meanwhile“But all these efforts have proved to be futile as these services have not been restored to journalists till date,” the KPC said in a statement.
It said currently, hundreds of journalists – both local and visiting and media workers – are forced to wait in queues for their turn to file assignments at the makeshift media facilitation centre here. “The centre is equipped with only five computers and a low speed Internet connection,” the statement said.—KMS