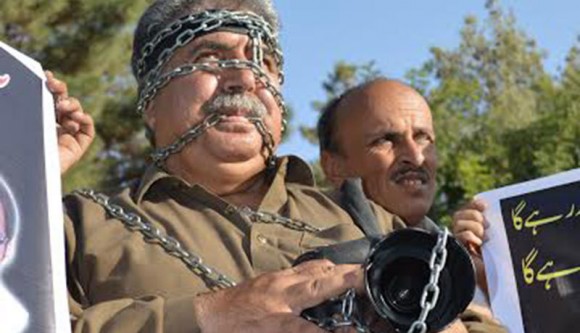 QUETTA: Journalists made a human-chain outside Balochistan High Court and Balochistan Assembly to mourn the killing of their colleagues on Monday evening.

The media representatives were carrying placards and banners inscribed with slogans demanding the arrest of perpetrators of journalists’ killings in Balochistan, Pakistan’s southwestern province.

Balochistan is considered to be one of the most sensitive areas for journalists. According to BUJ, during the last seven years, nearly 40 journalists have been killed in different incidents with the killers still at large.

The provincial government had announced the formation of a judicial commission six months back, but the judge probing the murder of journalists is yet to be nominated.

In today’s rally, the journalists chanted full-throated slogans “stop killing journalists they are your voice”, “long live freedom of expression” and “we want justice” among others.

“We will intensify our protest for the protection of journalists in Balochistan,” President Pakistan Federal Union of Journalists (PFUJ), Afzal Butt said while taking part in the demonstration.

Members of Balochistan Union of Journalists (BUJ), Hawkers community and the Quetta Press Club participated in the protest rally that turned into a human-chain in the high security zone of the city.

The journalist community has been protesting against the cold blooded murder of three colleagues in Quetta for the last fifteen days. “Journalists are in the line of fire in this part of the country,” Afzal Butt said.

The journalists demanded of the Balochistan government to step up efforts for the formation of a judicial commission to probe into the killings.

“We have lost around 40 colleagues during last seven years,” Irfan Saeed, the President BUJ lamented during the protest demonstration.

The journalists urged upon provincial and federal governments to ensure protection of the media men working in Balochistan and arrest those involved in the killings.

Pakistan is ranked as the world’s most dangerous country for journalists and reporters by rights groups and watchdogs.

According to Reporters Without Borders (RSF), seven reporters lost their lives in the line of duty in 2013 in the country.

Placing Pakistan as the 158th country out of 180 on its Press Freedom Index, a report by the RSF had noted earlier this year: “The government appears powerless in the Taliban… and the military establishment, which is known as a ‘state within a state’ among many international observers.”