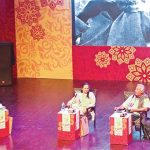 LAHORE: Journalists speaking in a session at the Faiz International Festival at Alhamra on Saturday said that journalism was never free in Pakistan and it can enjoy freedom of expression only while sticking to the truth.

Truth is powerful and is supported by people. Finding and promoting the truth is difficult, but Pakistani media needs to tread this path, the journalists said while speaking in the session ‘Independent Journalism in the Era of Restricted Politics’. The panel included Nasim Zehra, Wusatullah Khan and Wajahat Masood. Hamid Mir moderated the session.

Ms Zehra said attempts were being made to control minds and independent thought was declared treason. Transmission of the TV channel she appears on was suspended twice and no one accepted responsibility. Later, expulsion of Najam Sethi from the same channel was demanded.

She questioned the sagacity of gagging media in the age of social media where one could say anything. “When you cannot control expression why do you try to do so?” she asked, adding that “you cannot block the thinking process”.

The veteran journalist also alleged censoring of television programmes. She condemned the smear campaigns against some women journalists on social media, saying all women journalists should create a platform to fight such trends and stay united.

Wusatullah Khan said censorship and restrictions had become fine art, as nothing was clear who was doing what. “We urge them to operate openly,” he said.

He mentioned faults with owners of some media houses and young journalists, saying the latter were alien to the basics of journalism. He said music and journalism were linked, as the “present journalism is being sung in Raag Darbari”.

He further said journalism was an art of communication which could be made through various means, adding that one needed to find ways to communicate.

Wajahat Masood said the powers-that-be wanted to crush independent media, which was not alone. The entire nation was with the truth. “Give respect to all if you want respect,” he said. Journalists were committed to news, he added.

He further said there were independent journalists as well as ‘collaborators’. The nation knew who the latter were, but they had already wreaked colossal damage before they were identified. Independent journalists were fighting for freedom of expression ever since the creation of Pakistan and they were not alone; they were being supported by the nation, he said.