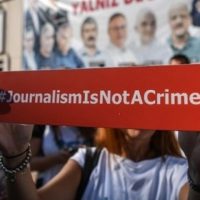 PESHAWAR: The hall echoed with applause of anxious parents while distinguished students were getting photographed on the stage with the chief guest giving away prizes.

Students with distinguished positions would wave their hands to the parents from the stage and get appreciation in thundering applause.

Then a girl’s name is announced, a woman at back row of seats stands and cries out in Pashto, “Bahadra bachai mae da (My brave girl).” She was the widow of slain Journalist Hayat Ullah Shaheed, who was kidnapped from Ex-Fata district of North Waziristan, tortured and later killed by unidentified people.

The widow is now left alone taking care of their seven children. Hayat Ullah was among those journalists of the soil, who paid the highest price for expressing their freedom of expression, their lives.

Journalism a dangerous profession in Pakistan

At least 71 journalists and media workers have lost their lives since 2001 while pursuing their duties in Pakistan. A recently published report on the state of media stated.

In total, some 163 cases of direct attacks on media took place in Pakistan only in 2009 including murders, assaults, kidnappings, explicit threats, censorship cases and attacks on media properties and establishments, Punjab bore the brunt of these attacks with 54 cases and NWFP a close behind with 52. Islamabad was the third biggest victim of attacks on media with 28 cases. In those cases against media workers, only two cases have the murderers been convicted by the courts.

The worst kind of targeting of the media workers were recorded in Ex-Fata districts. Tribal journalists were abducted by non-state actors, tortured and released only on the surety of the local elders.

Most of the cases were not reported in media. The security threat was such that the political administration had locked up the North Waziristan Press Club and opened on assurances and protest from the journalist community.

Even the watchman of the Ex-Khyber agency Press Club was seriously injured when the building of the press club was blown up with IEDs. In recent pass, the security agencies had warned the Bajaur Press Club president of security threats. The club had asked the Khyber tribal district administration for protection.

Who care for families of the fallen?

Whenever a media person is killed, the government issues formal condolence messages, there is a rush of dignitaries at the deceased’s homes where ministers make ritual announcements of compensation packages worth hundreds and thousands of rupees for the martyred journalists along with promises of free education facilities for the children of the victim.

These promises don’t go beyond the next day’s news. The families of the slain journalists end up pleading for the money announced by competent authorities at his burial ceremonies, leading tribal journalist, Zahid Wazir said.

Malik Mumtaz a journalist from North Waziristan was shot dead in Miranmshah in February 2013. The then president Asif Ali Zardari had promised a RS1 million compensation to the deceased’s family, but till date they have not received a single rupee from the announced package.

The case of Hayat Ullah is different, his family was initially supported by the Canadian journalist who he worked for, and then by the former president of Peshawar Press club, both men refused to disclose their names. Presently, another top journalist of Pakistan was supporting Hayat’s two children.

Not every martyred journalist gets such support. Haroon Khan of Swabi was shot dead in October 2017. The local Taliban had claimed killing Haroon. However, his widow had to take refuge with her two children at her parents’ home. They never got any compensation from the government.

A non-governmental organization “Freedom Network” in its report stated that threat level has increased. In the last five years 26 journalists were killed in Pakistan, only 16 cases went to courts, trial of only six cases was completed and only one conviction was awarded but no one was punished, said Iqbal Khattak of Freedom Network.

“If the threat sources are not jailed and penalised, they will continue to create havoc in the days to come for Journalist community” Zahid Wazir.

But generally the environment is growing unsecured each day past, media practitioners going to press from state institution as well non-state actors in the country.

Half of the journalists from tribal areas have moved out of the area. They are reporting from distance for the respective media outlets for which they work for. The media houses allow their reporters in tribal district to get news on telephone from local sources instead of being on the ground like professionals in any other area where there is no threat to life and limb, said Abuzar Afridi a journalist from the Khyber district.

Most of the reporters and media persons from tribal districts of Khyber, North and South Waziristan, Kurram and Orakzai have been displaced due to pressure from both sides.

“Abdul Azam was shot four times in front of my home, while Mehbob was blown in the blast at Karhano Market and Nasrullah has lost his breath in front of PA house Peshawar Saddar six years ago,” Afridi said recalling the colleagues he had lost to terrorism.

Beside militants, narcotics mafia also attacked them if they report on the issues, therefore most of the tribal journalists are either living in provincial capital Peshawar or Islamabad, he said. Government needs to formulate a policy for the protection of media workers from militants as well as the state institutions, and provide them a safe working environment.