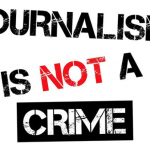 SUKKUR: The Sindh Journalists Council, Journalists Alliance, Human Rights activists and lawyers took out protest rallies in Sukkur, Khairpur, Sanghar and other cities against the raid by the Shikarpur Police on the house of senior journalist Sahil Jogi.

Addressing the rallies, Shafiq Shar and Aftab Nizamani among others alleged that Sukkur and Shikarpur Police were harassing and persecuting those journalists who were highlighting the police injustices against innocent citizens. They said that several fake cases were registered against Sahil Jogi for reporting about the unlawful actions of police officers only to intimidate him.

Demanding action against Shikarpur and Shikarpur Police, who also misbehaved with Jogi’s family during the raid, they said the journalists are united against the excesses of the police. They demanded a fair inquiry against those responsible for the unlawful action.