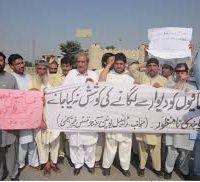 ISLAMABAD: Journalists from Rawalpindi and Islamabad called off their protest against the administration’s Nov 25 move to take all television news channels off-air on Monday after the government, as well as the opposition, assured them that moves would be initiated to amend the Pemra Act.

The Rawalpindi-Islamabad Union of Journalists (RIUJ) had called for the protest after news channels suddenly went off-air following the launch of an action to end the sit-in in the capital by members of some religious parties.

The RIUJ also decided to wind up its protest camp set up eight days ago outside the National Press Club.

The Leader of the Opposition in the National Assembly, Syed Khursheed Shah, visited the camp on Monday and criticised the government for ignoring the media.

He was accompanied by PPP leaders Senator Rubina Khalid, Senator Aijaz Dhamra and Chaudhary Manzoor. “The PPP will stand by the media in its fight for freedom and democratic values.”

The Minister of State for Information and Broadcasting, Maryam Aurangzeb, was also present at the camp. She said: “I agree with whatever has been said about the Nov 25 incident in the camp,” she said, adding: “I also agree and support the demands of the RIUJ.” She assured the protesters that the government would review all “black laws” promulgated by military dictators.

“The government is already working to bring an amendment to the Pemra Act and we are ready to work jointly with the RIUJ to amend the law,” she said.

After both the government and the opposition leaders agreed to amend the laws and abolish Section 5 of the Pemra Act, the President of RIUJ, Mubarak Zeb Khan, announced the closure of the camp.

He expressed the hope that the government would set up a committee shortly in consultation with the RIUJ to amend the existing law.

Afzal Butt, who heads his faction of the Pakistan Federal Union of Journalists, praised the RIUJ for raising the issue in time.