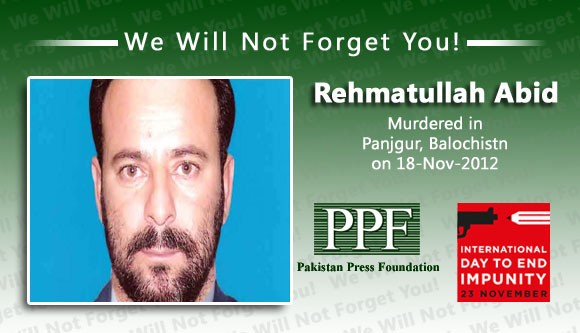 Unknown armed men shot and killed Rehmatullah Abid, district correspondent for the Dunya News television channel and a reporter for the Urdu-language daily newspaper Intikhaab. The incident occurred in the afternoon of November 18, 2012, in Panjgur, some 600 kilometers away from Quetta, the capital city of Balochistan province of Pakistan.

According to media reports, unidentified gunmen riding a motorbike opened fire on Abid while he was in a hairdresser’s shop. He succumbed to his injuries on the way to the hospital. Abid received one bullet in the head and five others in other parts of his body.

The Balochistan Union of Journalists condemned the targeted killing of Abid, calling it “an attack on the media in Balochistan”. Talking to Pakistan Press Foundation (PPF), Eesa Tareen, President of the Balochistan Union of Journalists (BUJ), said Pakistan has become the most risky country for journalists, especially for those working in the restive areas including Balochistan. He said BUJ and representatives of other journalists’ organizations were planning to hold demonstrations and rallies protesting against the brutal killing of journalists from November 20 onwards.

The Pakistan Federal Union of Journalists (PFUJ), the President of the Quetta Press Club Saleem Shahid and journalists working with Dunya TV condemned the killing of their colleague and demanded stern action by the government against the killers. The President of Pakistan, the Prime Minister of Pakistan, the Chief Minister of Balochistan province and the Human Rights Commission of Pakistan also strongly condemned the killing of the journalist. The Chief Minister announced compensation of Rs1 million (approx. US$10,395) for the bereaved family and ordered the law-enforcement agencies to arrest the killers.

Tareen of the BUJ said Abid belonged to a poor family, which is why he was working with two media organisations. He left behind a paralyzed father, sisters, two brothers and an ailing old mother. He was the only bread winner for his family. According to Abid’s family, he had no personal enmity with anyone.