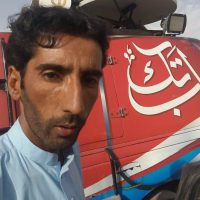 Zaibdar Marri, president of the Kohlu Press Club and correspondent of the Express News has been reported missing since July 13, 2018. Zaib’s family is concerned for his safety and has been unsuccessful in determining ascertaining his whereabouts. Kohlu is a district in the restive province of Balochistan where a simmering separatist insurgency has resulted instability and insecurity for many years.

The journalist had been covering the election campaign of Gazain Marri whose brother and opponent, Changez Marri who won in 2013 and reportedly has the backing of the establishment.

Speaking to PPF Khalil Ahmed, president of Balochistan Union of Journalists said there is an atmosphere of fear in Kohlu with concerns that journalists’ phones are  being tapped.

Local journalists said that Marri received threatening phone calls to stop reporting on and writing about Gazain Marri who returned from self-imposed exile late last year. Zaibdar Marri, however, continued to perform his duties as a journalist and report on the election campaign of Gazain Marri.

Talking to PPF, Tahir Najmi, editor of Roznama Express, confirmed that Zaibdar is their correspondent in Kohlu and said this could also be a case of tribal hostilities between two factions of the Marri tribe.

The president of the Pakistan Federal Union of Journalists, Afzal Butt, and Secretary General, Ayub Jan Sirhindi, have condemned the incident.  In a statement PFUJ, said, “It is impossible to conduct free and fair elections, if journalists are not allowed to report independently.”

PPF has also called on the authorities to investigate the matter and ensure the safe recovery of the journalist. In letters to the Pakistan Prime Minister Nasirul Mulk, Chief Election Commissioner Justice Retired Sardar Muhammad Raza and Chief Minister of Balochistan Alauddin Marri, PPF said such actions against the media will adversely affect the perception of unhindered media coverage of election activities and issues.

PPF reminded the government that the legally binding guidelines issued by the Election Commission of Pakistan, obligate state authorities to make special efforts to investigate all acts of violence, intimidation or harassment directed against media personnel and to bring those responsible to justice, particularly where the act was apparently motivated by an intent to interfere with media freedom.