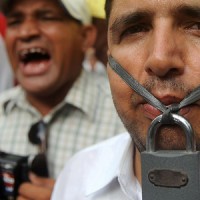 On 20 December, 2015 Muhammad Ansar, a reporter of Aaj News television channel was manhandled by police for covering the allegedly illegal closing down of sugar mills in Tando Muhammad Khan, a district in the southern part of Sindh province in Pakistan.

Police tried to prevent Ansar from filming the protest of laborers. Police also snatched his camera and cell phone. He was also detained and released two hours later after protests by journalists, and coverage of the incident by television channels

The incident occurred when a heavy contingent of police along with private security guards went to the mill to restrain the laborers from entering into Seeri Sugar Mill which was reopened on the orders of Sindh High Court.

Ansar while talking to PPF said the policemen sized his camera and made me to sit in police mobile for over an hour. The camera was returned but without the footage of the protests and police action. Police took his motorcycle and the next day when he went to the police station, he was told they did not have any policemen.

Journalists from Tando Muhammad Khan Press Club protested against the manhandling and the high handed attitude of the police.