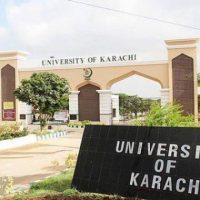 The Express Tribune’s Fawad Hasan was allegedly detained by security officials at the University of Karachi on Monday and then released after an hour.

Fawad was at a condolence reference organised by the Karachi University Teachers Society in memory of the varsity’s former associate professor Dr Hasan Zafar Arif at the institution’s Department of International Relations.

Seventy-three-year-old Dr Hasan, the Pakistan chief for the Muttahida Qaumi Movement-London, was found dead in his car in Ibrahim Hyderi on January 14. After the condolence reference on Monday, men in plain clothes escorted Fawad to the Rangers camp established on campus. However, the participants and organisers of the programme rushed into the KU vice-chancellor’s office and informed him about his detention.

Later, VC Prof Dr Muhammad Ajmal Khan assured the participants of the event that Fawad would be released after a brief inquiry. Following Dr Ajmal’s assurance, the organisers of the condolence reference reached the paramilitary force’s camp, where they received Fawad.

Rangers claimed that while addressing the condolence reference, Fawad had made statements against law enforcement and security agencies, which was why they had detained him for questioning.

Dr Riaz Ahmed, who was one of the organisers of the programme, said Fawad was unable to narrate all the details as he was quite terrified at the time of his release.

Ahmed said the condolence reference was organised by KU teachers and attended by members of civil society, teachers, human rights defenders and many others from all walks of life. “It’s very shocking to me that Fawad was picked up, because people should never be arrested for their speeches,” said Ahmed, adding that raising questions was not a crime and that the university was the only forum where students, teachers and intellectuals could raise questions. VC Dr Ajmal agreed with him. He said he staunchly believed in the freedom of speech. “In many of my lectures I have said that KU believes in the freedom of speech.”