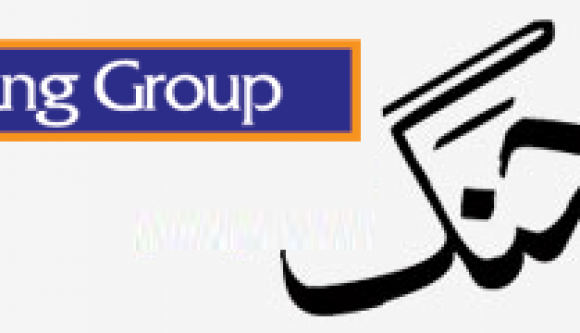 LAHORE: People from all walks of life including journalist bodies leaders and trader and lawyer representatives have strongly condemned the attack on Daily Jang Multan Resident Editor Zafar Aaheer and demanded immediate arrest of the assailants.

The major protest held outside the Geo/Jang Group offices on Davis Road was attended by journalists, students and members of civil society, who voiced their support to Geo and rejected the plot to ban it.

Abdullah Malik said Geo had given the message of love, adding that the elements, which did not believe in media freedom and democracy, were now busy in burning the copies of Jang and The News.Geo Lahore Bureau Chief Khawar Naeem Hashmi, in his address, said the institutions supposed to defend the people were busy in intimidating Geo.

Maqsood Butt stated that the journalists had achieved the freedom after a long struggle and their strength couldn’t be crushed through force. He said the honourable court had ordered restoration of Geo transmission but it had not been implemented.

Business Forum Chairman Samiullah Butt said attacks on journalists were bringing a bad name to the country and therefore the culprits should be brought to book immediately. Progressive Group Chairman Khalid Usman said that journalists are believed to be the ears and eyes of a society. If they are attacked, common people would feel themselves more insecure.

Anjuman-e-Tajiran Pakistan President Khalid Pervaiz said such incidents should not only be stopped but the government must take note of it immediately. According to reports received from Bhalwal, a traders meeting held here with Rehan Ahmad Butt in the chair, strongly condemned the attack on Zafar Aaheer. Haji Mahmood Ahmad Khokhar and others said attacks on Geo and Jang were a cause of concern among all citizens of Pakistan.

According to Baseerpur correspondent, known lawyers Mian Adnan Sarwar Wattoo Advocate, Mian Imran Khan Wattoo Advocate, Amjad Ali Mughal Advocate and others, addressing a joint press conference here Monday condemned the attack on Zafar Aaheer, blackout of Geo TV Network and burning of copies of Jang and The News as well as vehicles in different cities. They said there was no concept of such punitive actions against the media in any other country.

According to Kassowal correspondent, Federal Forum for Journalists Protection Central Convener Muhammad Jameel Malik condemned an attack on daily Jang Resident Editor Zafar Aaheer and demanded an immediate arrest of those who attacked him.

According to the Faisalabad Jang correspondent, the local journalists recorded their protest against any action against the Geo/Jang Group and the attack on Zafar Aaheer. They organised a rally from the Faisalabad Press Club to District Council Chowk.

The Faisalabad Union of Journalists (Dastoor) also demonstrated against the revengeful actions being taken against the Geo/Jang Group. The journalists who participated in the demonstration were carrying placards and banners reading pro-Geo and Jang slogans.

FUJ President Sajjad Haider Muna, addressing the demonstration, said 50,000 journalists and workers would be rendered jobless in case of the Geo closure. So the revengeful activities against the Geo/Jang Group be stopped.

Earlier, in a meeting called by the FUJ, Federal Union of Journalists General Secretary Riffat Qadri presented a resolution demanding action against those who burnt daily Jang vehicles and attacked and threatened Geo workers. The resolution also demanded an immediate restoration of Geo TV telecast. The resolution was passes with consensus.

Senior journalist Zafar Dogar led a rally in which the Geo/Jang workers and representatives of other newspapers and TV channels participated in large numbers. The prominent among them were Syed Waqas Haider, Shahbaz Ahmed, Mian Shafiq, Mian Shafiq and Sarfraz Naz.

Zafar Dogar said it wasn’t an attack on a single person or journalist as it targeted all the media. “All of us are Hamid Mir,” he remarked, adding that the attack on Aaheer was tantamount to an assault on the collective interest of the country.

In Sialkot, Union of Journalist General-Secretary Faisal Butt described the incident as an attempt to weaken media – fourth pillar of the state and vowed the journalists would foil such conspiracies through united action.

Punjab Press Council Chairman Malik Iftikhar Hussain said democracy and media could not be separated, but the anti-democracy forces were causing such unfortunate incidents only because of their vested interests. He said it was a duty of every citizen to condemn the trend.

Senior journalist Muhammad Ashraf Kamal said that citizens were being deprived of their right to watch the favourite TV channel for the last 43 days. The situation had worsened with each passing day as the Jang Group workers were facing life threat. He asked the government to end the prevailing confusion by playing its due role.

An emergency meeting was also held at Khanqah Dogran Press Club where its president, Mian Jamshed Abbas Dogar said the country had become a police state because of the apathy shown by the government. Senior Vice-President Sabir Waseem and Vice-President Nisar Ahmed Khan vowed that the voice of truth could not be suppressed by cowardly acts like the terrorist attack on Aaheer. They also stated that any kind of restriction media was unacceptable to the journalist community.

A meeting of the Pakpattan Press Club Monday condemned attack on daily Jang Multan’s Resident Editor Zafar Aaheer. Meanwhile, a meeting of Union of Journalists of Pakpattan also slammed the attack. They have demanded the government to immediately arrest attackers. They also condemned an incident near Lodhran, where armed men snatched Jang copies. They urged the government to provide security to people supplying newspapers.