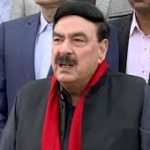 About the Covid-19 pandemic, the minister said the developed countries with big economies are struggling to deal with massive fallout of coronavirus. The government in Pakistan had been tackling the issue boldly by taking effective and timely measures, despite its limited resources. He said Pakistan Army and the government were on the same page regarding lockdowns to tackle Covid-19 pandemic. He said Prime Minister Imran Khan’s stance on lockdown was clear that the country could not afford a long-term lockdown, adding that the ISPR [Inter-services Public Relations] also issued the same statement.

Commenting on the proposed Corona Relief Tiger Force, Sh Rashid said that some people were politicising the issue, adding that not a single penny would be spent on the force and it was being formed to serve people. To another question, the minister said Railways was ready to operate 20 special trains from April 14 if the prime minister grants permission for it. To a question, he said trains would be run after adopting full protective measures. “We are working hard and the Railways will fulfill the requirements of the masses,” he added.

Sh Rashid said the lockdown, imposed in the wake of coronavirus pandemic in the country, was inflicting more than one billion rupees loss to the Railways every week.

He said the Railways would start its freight service with the prime minister’s permission from April 15. “Before the lockdown, we had started a record 20 trains. Had we not run 40 trains at the start of the lockdown, passengers would have been stranded in Karachi,” he added.

“In two days prior to the lockdown, more than 165,000 passengers travelled by trains,” he added. The minister said that pensioners and railway employees should not be worried, as the data of nearly 1,670 coolies, has been sent to the EhsaasProgramme for financial support. “No employee of Pakistan Railways has contracted the virus and the situation in the country is better as compared to some other countries.

The situation will become clearer on April 14. If the situation does not improve, we will not resume train operations,” he added. To another question, he said that salaried persons and pensioners of the Railways would not be affected and they would get salaries as well as pensions according to the schedule.

He said some leaders like those of Pakistan Muslim League-N President Shahbaz Sharif were criticising the government while sitting in front of their laptops.

To a question about lockdown in the Indian occupied Kashmir, the minister said the whole nation was standing with its brothers in the IOK.

“Kashmiris are our brothers and we can never leave them alone,” he said and strongly condemned the atrocities being committed by the Indian government and the army in the valley.