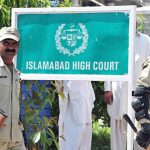 ISLAMABAD: The Islamabad High Court (IHC) on Monday issued notices to the Ministry of Information Technology and Telecommunication (MoITT) and other respondents and sought their reply on plea questioning the legitimacy of new social media regulations Citizens Protection (Against Online Harm) Rules, 2020.

Chief Justice Islamabad High Court Justice Athar Minallah issued notices to the federation, information technology and law ministries over the petition. Petitioner’s counsel Barrister Jahangir Jadoon maintained that the Citizens Protection (Against Online Harm) Rules 2020 meant to curb the freedom of expression and contravenes the constitution. The court, however, rejected the petitioner’s request to immediately suspend the applicability of the Citizens Protection (Against Online Harm) Rules, 2020.

The lawyer alleged that under the law, the coordinator has been given more power than the authority itself. The petitioner said that according to the rules, the coordinator can impose a fine up to Rs500 million on an individual if they violate the rules. He further argued that the rules were in conflict with Articles 19 and 19-A of the Constitution. After hearing the arguments, the court issued directives to the relevant parties and sought their reply. It is to mention here that on February 12 the federal cabinet had approved a new set of rules to regulate social media. Under the new rules companies, such as Facebook, Twitter, YouTube, and even TikTok have to register themselves in Pakistan within three months and to open their offices here at the same time.