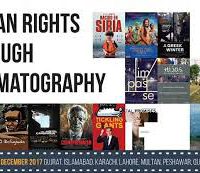 Islamabad: Dedicated to the 70th anniversary of Universal Declaration of Human Rights, the opening ceremony of the 4th edition of Human Rights through Cinematography Film Festival was held at Pakistan National Council of Arts, (PNCA) on Sunday. Running from November 25th to December 10th, the film festival is led by the European Union (EU) and the United Nations in partnership with a large number of member states of the EU, Pakistan Institute for Parliamentary Services, Centaurus Cineplex and educational and cultural institutions.

The opening ceremony featured the screening of ‘Freedom for the Wolf,’ an epic investigation into what the filmmaker Rupert Russel terms as ‘illiberal democracies’ and how elected leaders of the new generation are dismantling freedom and democracies as we know it.

The festival will present twenty seven award winning documentaries on human rights issues from around the world and screenings will be held simultaneously in nine cities of Pakistan, comprising Gujrat, Lahore, Rawalpindi, Multan, Islamabad, Karachi, Peshawar, Charsada and Quetta. The screenings are open to the public.

The festival aims to provide a window to universal human rights challenges to the Pakistani public in general and young audiences in particular and urge them to reflect on solutions. An online campaign to generate debate is also launched by the organisers and can be followed under the hashtag #HRTC2018

Ambassador of the EU, Jean-François Cautain, said, “Arts and Culture in general and documentary films in particular, are increasingly playing an important role for understanding the world and its peoples. The Human Rights through Cinematography Festival, especially with the screenings in universities, is an excellent tool to raise awareness about the different facets of Human Rights and to engage students in constructive debates. The EU stands firm with Pakistan in its efforts for the promotion of Human Rights with special focus on gender equality, freedom of religion and belief, rule of law, access to justice and freedom of expression.”