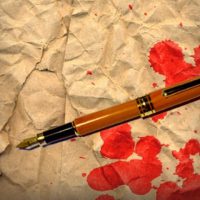 “I AM already on their hit list. I don’t want to win a race against a natural death by writing something about the Taliban,” said Mukarram Khan Atif, with a reluctant smile as he tried to put off my request to publish something from his vast repository of information on Fata.

After dropping me in front of the Peshawar University’s gate, and refusing my offers of a cup of tea, he and his friend sped away in their car in a bid to reach home before sunset.

Two days later, he was shot dead as he offered evening prayers in a mosque in Shabqadar tehsil of Charsadda. Like so many of his colleagues, he had shifted from a tribal area (Mohmand Agency) to settle in the suburbs of Peshawar. He was working for a local channel as well as the Pushto-language Radio Deewa of the Voice of America. His targeted killing is another warning bell for the journalist community in Pakistan, that would like to see something different in 2012 after losing some two dozen of its members in the past two years.

Nearly 80 journalists have been killed in the last decade in Pakistan; 24 of them belonged to Fata and Khyber Pakhtunkhwa. The country has the dubious distinction of being counted among the top-ranking death zones for media professionals.

Perhaps those who die of causes seemingly unrelated to their work — such as Alamgir Bittani who died of a heart attack — may not be seen as journalists who perished in the line of duty. Nevertheless, cases like these do reflect the tortuous working conditions, where threats cause unbearable mental stress that translates into sometimes fatal consequences. Under the circumstances, death for many reporters in conflict-hit areas is a daily expectation.

Now, who can offer a remedy? The government is unable to help journalists in the current crisis. Not too long ago, Interior Minister Rehman Malik suggested that journalists carry arms for self-defence. One can hardly expect a more ridiculous proposal. Had arms been a solution, Mukarram would have escaped death. He always carried a gun. We must also bear in mind that such targeted killings are not reported as frequently from the ‘lawless’ tribal belt, as from the heavily guarded, settled districts of Khyber Pakhtunkhwa.

Seen through a professional lens, the killing of Mukarram has led journalists in the area to question their earlier stance when a colleague was killed. Normally, journalists engaged in a guessing game whenever they lost a colleague. Hayatullah was murdered in South Waziristan because he was too shrewd for his job; Musa Khan was killed in Swat because he would get rash at times; the brutal death of Nasrullah Afridi was attributed to his personal enmity with Mangal Bagh in Khyber Agency; and Ibrahim Khan was killed because he supposedly took the ‘unethical’ step of taking unauthorised pictures of Al Qaeda players in a volleyball ground in Bajaur Agency.

Holding their dear colleagues responsible for their own deaths, media professionals usually tried to learn from the ‘mistakes’ of their dead friends to help focus on future challenges.

But the death of Mukarram Khan has put them all in a quandary. How can they rationalise it anymore? The reports that he filed were relatively balanced and he was considered a professional in the field. The statement of the spokesman of the banned Tehrik-i-Taliban (TTP) is really chilling in this regard. He said that Mukarram was killed for not giving coverage to the Taliban. Blaming journalists for one-sided coverage, he said: “Other journalists are also on the TTP’s hit list, and will be killed the same way.”

But the issue is much deeper than it seems. The threats may have been issued against journalists in the field, but they only collect data and put it in the relevant framework; they have nothing to do with the editorial policy which dictates how much coverage is to be given to the relevant players.

After the Swat operation in 2009, coverage patterns have changed substantially following public criticism that the media was promoting militancy by glorifying the militants. Resultantly, the vocal 24/7 TV channels diverted their attention from the Taliban to focus more on entertainment programmes. A one-sided portrayal of the Taliban, however, continued via ISPR handouts and foreign media outlets.

This editorial shift at the top, unfortunately, has held the hapless reporter accountable at the bottom. The embarrassed and demoralised media-savvy militants have no power to settle scores with media bosses. But they carry the organisational strength to hit out at field reporters by making them pay for the ‘crime’, which they have not committed.

This is why some believe that Mukarram Khan was killed because he was considered a cog in the US propaganda machine. One does not know how many more like him will suffer if the trend to use journalists for non-journalistic objectives is not stopped soon.

The onus of responsibility largely falls on media organisations both within and outside Pakistan, especially those from the US. Such media outlets urgently need to revamp their editorial policy by disassociating themselves from non-journalistic objectives, which they are actively following as part of public diplomacy functions.

This change must be reflected in the system of collecting, confirming and broadcasting militancy-related news. In most cases, such media outlets have largely followed the dominant power centres (the security forces) by serving as a propaganda tool.

This approach becomes more risky, when some outlets become more loyal than the others. Such organisations must not forget that somebody is going to pay a very high cost somewhere. Instead of waiting for more reporters to get killed, a journalist- and journalism-focused approach can help avoid trouble.

Understandably, journalists cannot sit back and see their colleagues being killed for no fault of theirs. But wooing the Taliban would not help when the challenge also involves state and non-state elements. The issue requires a thorough overhaul of the working conditions that are pushing journalists to become a party in the conflict.