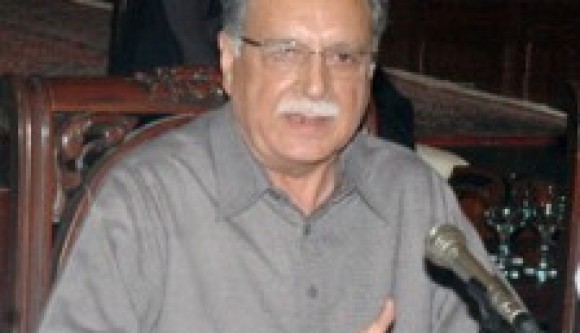 ISLAMABAD: Federal Minister for Information, Broadcasting and National Heritage Pervaiz Rashid has said that the attack on Hamid Mir shows the dark side of the picture. He added that no allegation had been levelled against the Inter-Services Intelligence (ISI) and as such it was not an issue.

Talking to mediapersons at the Pakistan-China Friendship Centre after inaugurating the National Book Day organised by the National Book Foundation (NBF) here on Tuesday, he pointed out that a logical approach should be adopted on the attack on Hamid Mir while some circles were presenting a negative picture of the incident.

“The people, the government and parliament respect the national security institutions. We have a relation of faith with them,” the minister said.Every institution was playing its part according to the role written in the Constitution, he said. “There is no difference of opinion among the institutions on the national agenda,” he noted.

The minister said the talks with the Taliban were started in consultation with all the political parties and all the matters were going in the right direction. “Today, the state of Pakistan and national institutions are standing with scholars and intellectuals. They are standing with those who speak the language of arguments and not of weapons,” he stated.

He said that dialogue and tolerance should be promoted and difference of opinion should be acceptable.The minister said that the government had demanded of the TTP to release the Islamia University’s vice chancellor.

Responding to a question regarding Musharraf’s visit to Karachi, the minister said the movement of any citizen from one city to another did not matter as the rule of law was supreme everywhere, including Karachi and Islamabad.

Earlier, speaking at the inaugural ceremony of the National Book Day, the minister said, “It will be a moment of happiness for Pakistan when a day comes when such book events are held in Waziristan and Fata, where schools and colleges were closed and extremist groups resorted to violence to achieve their goals.”The minister assured the government’s cooperation to the NBF in developing the reading habits among the people.