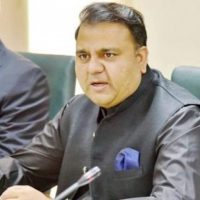 ISLAMABAD: Federal Minister for Information and Broadcasting Fawad Chaudhry has said the government while disbanding Pemra has decided to establish Pakistan Media Regulatory Authority, which will simultaneously regulate electronic and print media as well as social media.

“In Pakistan, media enjoys freedom and is effective too as it can be compared with that of any developed country,” said the information minister while addressing a conference on ‘National Security, Nation-building and Mass Media’ organised by the Pakistan Institute of Conflict and Security Studies on Thursday.

“Under the current media regulatory regime, there is a lot of pressure on the Pakistani media and it is possible that in the coming years the media might have to face even bigger challenges,” said Fawad. “With the arrival of globalisation and artificial intelligence, along with various industries the media industry will also be affected.“As a result the media industry could further shrink.”He warned that the structure of print media could change and thousands more could be rendered jobless.

“We have to make policies keeping in mind the global trend and have to move towards international regulations,” said the federal minister. “This is a world of competition … we have to improve our culture, films and dramas otherwise they will be finished.”

He said it was the first time that the government was going to build Pakistan Media University. “It is our effort that our media policy be in line with the current era where even professionals will be mesmerised by the fields of innovation and technology at the media university,” said Fawad. “The prime minister [Imran Khan] is optimistic regarding the latest technology.”

Later addressing the media, the information minister said, “We welcome the decision of the Indian cabinet to open the Kartarpur border.

The suggestion to open the border was given by the chief of army staff to former cricketer and Indian parliament member Navjot Singh Sidhu during his visit to Pakistan.He said the Sikh community would benefit the most from opening of the Kartarpur crossing.

“The 550th birth anniversary of Baba Guru Nanak is being celebrated and Kartarpur is his birth place,” said Fawad. “Pakistan talks about peace in the region. Pakistan wants peace with both India and Afghanistan due to which it gave the suggestion.”