Home » Featured » Govt to crack down on social media misuse 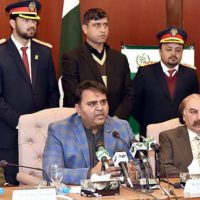 Addressing the closing session of a training workshop for parliamentarians at the PIPS here on Wednesday, the minister said a mechanism to this effect has been prepared in consultations with the security agencies. He said several people have been arrested who were involved in misusing social media .

He regretted that certain elements through fake accounts were resorting to hate speeches and issuing edicts. He said these elements will be brought to book. Fawad said enforcement of relevant laws will be made to ensure rule of law.

The minister said, “We are also establishing Pakistan Media Regulatory Authority which will provide one window facility to all media outlets and ensure enforcement of related regulations.”

He said Pakistani nation had almost overcome the menace of terrorism and this was made possible by the resilience of the nation.

The minister said Pakistan had given immense sacrifices in the war on terror. “In the next phase we will further consolidate the gains made against terrorism by not allowing those resorting to hate speeches.”

He said, “The incumbent government strongly believes in rule of law in Pakistan and it will not allow anyone to misuse the social media . World is facing serious challenge of extremism. Dialogue is the only solution to resolve the issues relating to extremism and terrorism.”

Fawad Hussain said Pakistan, which used to be a tolerant nation, was trapped in an irregular and prolonged conflict in the neighborhood in 1980, which eventually flourished the scourge of terrorism and extremism.

Addressing closing ceremony of two-day workshop on “ Strategic Communication and Media Engagement in Crisis Situation,” he said Pakistan was a resilient nation which rendered monumental sacrifices against terrorism and extremism and successfully overcome the menace.

The minister said that Islam was spread through Sufism in the sub-continent and not through the sword which was itself manifestation of the fact that there was no concept of extremism and terrorism. The history of endurance and tolerance of the people of the sub-continent, especially the Indus civilization, was very old, he remarked.

He said presently the entire world was facing a serious challenge of extremism and Pakistan also remained its victim. In India, extremism did increase after Modi government came to power while various other communities of the world have also suffered from extremism in some way, he added.

He said implementation on rules was responsibility of the state and Imran Khan’s government was fully committed to ensure enforcement of law from the first day and no one will be allowed to promote hatred in the country.

Fawad Hussain said the government had largely overcome the hate speech on formal media, thanks to the cooperation of media houses

He said that recently some arrests were made for promoting hate speech against the national institutions on social media .

He said extremism only breeds terrorism, and dialogue and discussion can solve problems. Freedom of expression was a fundamental right but not without restrictions under the law of the land, he added.

Fawad appreciated the PPC for organising the workshop on extremism which was currently a global problem.