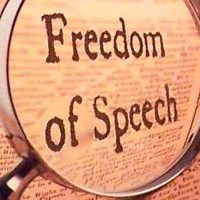 When the fundamental rights to ‘liberty’ and ‘dignity’ guaranteed by Articles 9 and 14 of the constitution have limited real-life utility, the heavily conditioned Article 19 promising free speech is dead in the water.

Why? Because we are a society where deference to authority is ingrained at every stage of one’s socialisation, where ‘freedom’ is a dirty word, where dissent is an antonym for respect and where the state makes no bones of its resolve to maximise its power by controlling speech. The PTI’s threat of controlling social media, therefore, makes folks nervous.

Article 19 makes free speech and expression subject to “reasonable restrictions imposed by law in the interest of the glory of Islam or the integrity, security or defense of Pakistan…friendly relations with foreign states, public order, decency or morality, or in relation to contempt of court, commission of or incitement to an offense.” With such overarching justifications for censorship, free speech could only have found protection if the reasonable restriction requirement had been strictly construed and enforced by our courts. And that hasn’t happened.

Article 19 was inscribed within the Prevention of Electronic Crimes Act, vesting in the Pakistan Telecommunication Authority “power to remove or block or issue directions for removal or blocking of access to any information through any information system if it considers it necessary in the interest of the glory of Islam or the integrity, security or defense of Pakistan or any part thereof, public order, decency or morality, or in relation to contempt of court or commission of or incitement to an offence under this Act”. This was the handiwork of the PML-N.

When PECA was being considered by parliament many had cautioned that it would criminalise conduct that shouldn’t be criminalised, equip investigation agencies and the PTA with overbroad and unguided powers susceptible to abuse and chill free speech. While civil society was calling out PECA for being a disaster, the then IT minister, Anusha Rehman, was labelling critics as enemy agents driven by nefarious agendas. Now when free speech will be clamped by the PTI in exercise of PECA powers, the PML-N will be at the forefront making noises.

In 2015-16, the PML-N was drunk on power. As the state’s visible face, it believed PECA would be a power tool it would control. Back then, Imran Khan spoke up against online censorship. Dr Arif Alvi and Asad Umar were amongst opposition MNAs most supportive of having checks and balances built into PECA. While roles stand reversed, the underlying motivation is consistent. Today, the PTI mistakenly sees censorship as a power tool that it will control. It is our friend Fawad Chaudhry’s turn to lecture us on how our freedom to speak puts the West to shame.

Those outside the power elite can see Islamabad’s bewitching effect on those within the echelons of power. Islamabad creates a mesmerising illusion that you will be here forever. The PML-N thought it would arm itself with PECA to cut its critics to size. The PTI probably thinks the same now. But power really belongs to the state – and it hits whoever stumbles on its wrong side, as the PTI may ultimately discover too.

Justice Holmes noted in Abrams v US that, “to allow opposition by speech seems to indicate that you think the speech impotent…But when men have realized that time has upset many fighting faiths, they may come to believe even more than they believe the very foundations of their own conduct that the ultimate good desired is better reached by free trade in ideas – that the best test of truth is the power of the thought to let itself accepted in the competition of the market.” It is thus perfectly logical to try to control speech if you are interested in only power and not the truth.

As a historical matter, our state has remained interested in monopolising power without being inconvenienced by the truth. The focus on controlling speech has thus been a constant. But was it ever as bad as it is now? Today, one cannot write or speak in a way that challenges the approved narrative. Here are two simple tests: note newsworthy events revealed by social media that don’t make newspaper headlines or evening talk shows; and count the number of individual YouTube channels opened by mainstream journalists.

So where does the problem lie? Do we have bad laws? Is there a gap between law and its implementation? Do we have unaccountable power structures? Or do we have a cultural ethos that eschews liberty? The safest answer would probably be ‘all of the above’. It isn’t that our judges are unable to aptly define ‘reasonable restriction’. As far back as 1958, it was held in East and West Steamship Company vs Pakistan that “a ‘reasonable restriction’ … is one which is imposed with due regard to the public requirement which it is designed to meet.”

That “anything which is arbitrary or excessive will of course be outside the bounds of reasons in the relevant regard, but in considering the disadvantage imposed upon the subject in relation to the advantage which the public derives, it is necessary that the court should have a clear appreciation of the public need which is to be met and where the statute prescribes a restraint upon the individual, the court should consider whether it is a reasonable restraint, in the sense of not bearing excessively on the subject and at the same time being the minimum that is required to preserve the public interest.”

Likewise, the judiciary has at times been extremely articulate about the need for fundamental rights to trump all else. In Pakistan Muslim League v Federation (PLD 2007 SC 642) it was stated that, “the idea behind the concept of fundamental rights is that the preservation of certain basic human rights against state interference is an indispensable condition of free society” and that “a restriction is unreasonable if it is for an indefinite or an unlimited period or a disproportionate to the mischief sought to be prevented or if the law imposing the restrictions has not provided any safeguard against arbitrary exercise of power”.

On free speech Justice Munib Akhtar held in All Pakistan Muslim League vs Govt of Sindh that, “fundamental rights have been placed in the constitution not merely to protect acts, conduct and views that we may approve of but also, and especially, to protect views with which we may disagree or which we may even find unpleasant or unacceptable. In the context of freedom of speech (and expression of views at a political meeting is one form of speech), which of course engages Article 19, what therefore is protected is not merely speech that the listener may approve of or agree with, but also speech that he may disagree with or even hate.”

Such rulings, while a breath of fresh air, unfortunately remain exceptions to the rule. The rule is that critical speech will be penalised for threatening security, integrity, defence and the morale of state institutions by not treating the policies, actions and judgments of those who hold power within those institutions as immune to criticism; for jeopardising foreign relations if it critiques foreign policy; for undermining the morality or glory of Islam if it calls out the bigotry of religious elites; and for endangering public order if it censures the ruling political regime.

And if all else fails, the argument against irreverent and audacious speech is that free speech is one thing and ‘maadar pidar azaadi’ quite another. And that is the crux of the matter. We can rewrite Article 19, we can expunge Section 34 from PECA and other censorship enabling provisions, we can evolve progressive jurisprudence, and we can devise procedural mechanisms to guard against abuse of authority. But how do we begin doing any of this when our state and society share an aversion for independent human agency that questions entrenched ideas, norms and customs?

Here is the counsel of Hazrat Ali (AS) for parents: “Do not raise your children the way [your] parents raised you, they were born for a different time.” If you wish to raise kids such that at the age of maturity they act as your clones incapable of entertaining ideas you eschew or making choices different from yours, you believe in a form of paternalism that is destructive for human liberty and autonomy and freedom of thought and conscience. The relationship between ‘azaadi’ and ‘maadar pidar azaadi’ is this: if you can’t accept the latter, you don’t stand for the former.