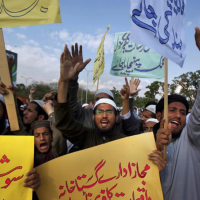 An Anti-Terrorism Court (ATC) on Saturday sentenced a man to death for sharing blasphemous content about Islam on social media, a government prosecutor said.

ATC Judge Shabir Ahmed announced the sentence for the 30-year-old accused in Bahawalpur, according to Shafiq Qureshi.

The Counter Terrorism Department (CTD) had arrested the accused, who belongs to the Shia community, last year in Bahawalpur.

The accused, who hails from Okara, had allegedly posted derogatory content about prominent Sunni religious figures and the Holy Prophet Muhammad (PBUH) and his wives on Facebook.

A case was registered against him on behalf of the State at CTD Multan police station under Section 295-C (use of derogatory remarks, etc., in respect of the Holy Prophet) and Sections 9 and 11w of the Anti-Terrorism Act (which deal with whipping up sectarian hatred) .

The sentence is the harshest among cyber-crime related sentences handed down so far in the country. Pakistan has never executed anyone convicted of blasphemy.

Blasphemy has been a contentious issue in the country where people have been murdered over allegations of sacrilege. Earlier this year, a mob in Abdul Wali Khan University Mardan beat up a student, Mashal Khan, to death after accusing him of blasphemy over social media.

The incident caused an outrage across the country, with calls for the blasphemy law to be amended. The investigation into Mashal’s murder was concluded after a joint investigation team probing the case cleared him of all blasphemy charges.

Pakistan is cracking down against blasphemy related crimes on social media with the Interior Minister Chaudhry Nisar threatening to block all social media websites with ‘blasphemous content’ earlier this year.