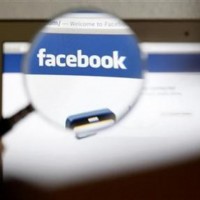 1,864 pieces of content blocked so far on request
of Pakistan govt since 2013

WASHINGTON: Facebook, which has about 28 million users in the country, has admitted that it is carefully reviewing its content in Pakistan and cooperating with the government in blocking blasphemous and anti-state content.

A spokesman for the social media giant told The News in a written reply that the company is in regular contact with the government and helping to enforce the local law on blasphemy.According to official Facebook data, the company has so far blocked 1,864 pieces of content for blasphemy and local law violation on the request of Pakistani government since 2013.

The Pakistan government has requested data from Facebook about 3,963 accounts during last three years.In majority of these cases Facebook complied with the government and provided the user data to officials.

“Based on legal requests from the Pakistan Telecom Authority and Federal Investigation Agency, we restricted access to items that were alleged to violate local laws prohibiting blasphemy and condemnation of the country’s independence,” Facebook said in its government report.

According to fresh Facebook data, Pakistan has made 1,002 requests for information regarding 1,431 users of social media website during the last six month of 2016.The company complied with the two-thirds (67.5%) of these requests. Facebook also restricted six pieces of content for alleged blasphemy during these six month.

Data shows a steady rise in the Pakistan government’s request for data over last few years.During 2013, the PTA and FIA requested information about 210 user accounts. In response, the Facebook provided information on about half of the requests.

In 2014, the government sought data about 312 users but Facebook complied with less than half of those request.The compnay blocked 1827 pieces of content during this year which is highest in last four years.

In 2015, Pakistani government demanded data on 981 Facebook accounts and in over 60% cases the same was provided by the company. In addition, 60 pages were blocked for blasphemy and other offenses during the year.

In 2016, the government sought data about 2,460 users and in 66.4% cases the same was provided by Facebook. During the year, 31 pages were also blocked by Facebook for blasphemy and other offenses.

Pakistan is not the only country requesting data of users and restriction on content from Facebook.In fact, the country was ranked top 10 among those requesting such information as government around the world are putting pressure on social media network to provide user data.

During last six months of 2016, the highest such request came from the United States followed by India.

According to Facebook, the US government sought data of 41, 492 users from the company while India requested information about 9932 accounts.The US did not ask for blocking any content. India did make a request to block 719 content pieces on the basis of violation of its laws.

The Facebook defended its decision to cooperate with the governments saying: “We respond to valid requests relating to criminal cases. Each and every request we receive is checked for legal sufficiency and we reject or require greater specificity on requests that are overly broad or vague.”

“The vast majority of these requests relate to criminal cases, such as robberies or kidnappings. In many of these cases, the government is requesting basic subscriber information, such as name and length of service. Requests may also ask for IP address logs or account content,” the company said in its government report.

The spokesman told The News that company is educating people in Pakistan on its security tools to help keep their information secure.

The company said it was aware of feeling of insecurity among the Pakistani user about their possible fake profile especially after killing of a Mardan University student Mashal Khan last month over alleged blasphemy on Facebook.The company said it’s taking measures to provide a safe environment to its users in the country.

After the killing of Mashal Khan, a large number of Pakistanis had posted warning about their possible fake IDs that could be used to accuse them of blasphemy.

The spokesman said misrepresenting someone on Facebook was against the company policies, and the company had a dedicated team that’s tasked with helping to detect and block these kinds of scams.

When contacted, a PTA official told The News that the authority receives public complaints about blasphemy and the same are forwarded to Facebook for restriction.“We are only regulators, we don’t undertake criminal proceedings against accounts found violating law. The criminal proceedings are carried out by FIA,” he said.

Shahzad Ahmad, country director of “Byets for All, Pakistan, an organization working for digital rights, criticized Facebook for blocking some legitimate political expression.“We understand that Facebook do have their own policies and principles but due to business dynamics, at times they cave in to state pressures.

Right now, we are witnessing the same in Pakistan, where several pages of legitimate political expression are being taken down, which had absolutely nothing to do with blasphemous content,” he said.

Ahmad believes Facebook should work with a multi stakeholder group in Pakistan to ensure that take down requests are dealt as per global human rights principles and standards and voices of dissent are not silenced and marginalized communities are not targeted.