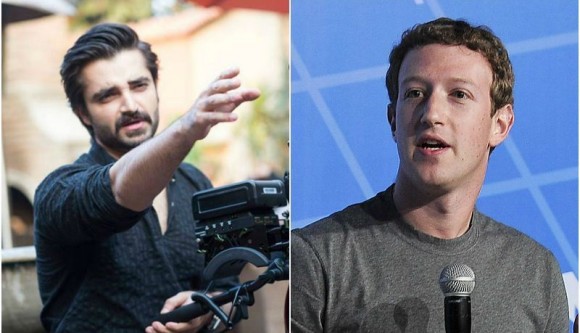 CEO and Founder of Facebook, Mark Zuckerberg on Monday said his social network’s removal of actor Hamza Ali Abbasi’s status regarding the Charlie Hebdo attack and freedom of expression may have been a mistake.

When asked by one profile Angelic Munni what Zuckerberg has to say about his network’s deletion of Hamza’s post, Mark Zuckerberg responded: “I don’t think this should have been blocked. Our team might have made a mistake. Justin, can you look into this?”

In the response, Zuckerberg tagged Justin Osofsky, whose Facebook profile identifies him as Vice President of Global Operations and Media Partnerships for Facebook. The CEO’s comment has so far got over 950 ‘likes’.

Osofsky later commented on the thread and apologised. “As Mark mentioned, we made a mistake in taking this down. We try to do our best, but sometimes make mistakes. We apologize for this error, and hope that the author will re-post it as we are not able to restore it from our end. Thanks for bringing it to our attention.”

Pakistani actor and director Hamza Ali Abbasi Sunday said that Facebook authorities deactivated his profile and removed his status in which he had condemned the killings at the Parisian office of satirical weekly Charlie Hebdo.

Hamza posted a screenshot of the deleted post on Sunday along with Facebook’s notification that said they had removed it since it violated the social networking website’s community standards.

The actor, who is vocal on social media about his views related to social issues, politics, culture, and religion had condemned the killings at Paris’ Charlie Hebdo office last week and said, “even my blood boils when someone insults my Prophet (Peace be Upon Him) but that does not give individuals the right to kill”.

In the status shared on his verified Facebook account – which has over 1.6 million followers – he said that while “freedom of expression should include criticism, disagreement or even rejection of faiths or ideology but should not and must not allow “insult”.

Hamza went on to say that the West must revisit and fix its definition of ‘freedom of speech,’ otherwise someone from the two billion Muslim population “will go ballistic and kill unjustly”.

“Would it be ‘freedom of expression’ if I brand black people as niggers or if I say Hitler was a messiah?” he added.

Speaking to Dawn.com, Hamza relates how it all came about. “I had been trying to log into my Facebook for a couple of hours and it wasn’t accepting the password. I genuinely thought it had been hacked but then I got an email from Facebook saying that my account had been temporarily blocked and my status had been deleted and this was the first of three warnings. That really made me angry so I took the screen grab and posted it as soon as I had access to my account.”

He adds, “I post so many controversial things on my Facebook, I believe in voicing my opinion. It’s just funny that their selective freedom of speech caused them to delete only this particular post of all things.”

On learning that Mark Zuckerberg had responded and called it a mistake, he said, “I’m glad that it has gotten back to him and that it’s brought attention to exactly what I was trying to convey in my post. Freedom of expression that is not universal is not really freedom, is it?

Elaborating on what his post was about, the young actor said, “It’s not fair that when we say things that go against the West, we are branded as racists or intolerant. One is allowed to disagree, one is allowed to criticise but we must not make fun of exemplary/religious figures. I can make fun of Gandhi but that doesn’t mean I will. It’s important to address such issues and convey our message in the most civilised manner possible. When you stoop to a level of derogatory insults, there is a possibility of some backlash from a community of over two billion people.”

Internet rights groups in Pakistan had slammed Facebook ‘double standards’ on Monday, a day after Pakistani actor and director Hamza Ali Abbasi Sunday said the network deactivated his profile and removed a post in which he had called on the West to rethink its definition of ‘freedom of expression’.

“This is beyond ridiculous,” Sana Saleem of Bolo Bhi tells Dawn. “I don’t understand what this double standard is.”

Saleem, whose organisation advocates digital security and privacy, said the social network was guilty of hypocrisy. “Facebook removes pictures of a woman breastfeeding, but they won’t, for instance, remove images of child pornography,” she said, citing the example of Facebook’s refusal to take down a page promoting child prostitution despite repeated complaints.

“What are the standards for Facebook when it comes to removing content? How does it work? Is it automated? If so, it’s completely flawed,” says Saleem. “If it’s a team reviewing content, it is flawed.”

“This is very worrying because Facebook now owns Intsagram and Whatsapp. If the same policies are applied across the board, that will be the death of freedom of expression,” she adds.

Shahzad Ahmad of NGO Bytes for All says, “In cases of ambiguity, Bytes for All urges Facebook to err on the sideof freedom of expression rather than censorship, and only block those accounts and posts which directly and intentionally call for violence in an actionable manner.

He adds however, “Having said this, we do not endorse the contents of Hamza Ali Abbasi’s post. Rather we believe that criticisin, questioning, or even insulting, any individual or ideology does come under freedom of expression, even if it is offensive to many, so long as it is does not directly and intentionally incite violence.”

The incident comes just days after Facebook’s CEO Mark Zuckerberg stressed on the company’s commitment to freedom of speech, and pointed out that a ‘extremist in Pakistan’ had tried to have him sentenced to death for refusing to ban content about Prophet Muhammad (Peace be Upon Him). In the January 9 post, he had said, “I won’t let that happen on Facebook. I’m committed to building a service where you can speak freely without fear of violence.”