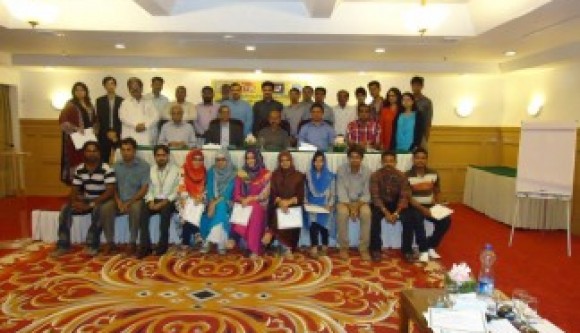 Karachi: Despite many shortcomings the role of general elections 2013 in furthering the process of democracy in Pakistan is widely accepted, besides completion of the five-year tenure of previous democratic government and holding elections successfully and peacefully to elect the coming administration has improved the image of Pakistan at global level, said speakers of a conference at a local hotel on Saturday.

The conference on ‘Media role in 2013 elections’ was organized by Pakistan Press Foundation (PPF) with support of Friedrich Ebert Stifung (FES) and attending by a large number of professional belonging to electronic media who covered the recent general elections in Pakistan.

Pakistan Press Foundation secretary general and chairman Pakistan Press International (PPI) News Agency said successful holding of the general elections have certainly improved the image of Pakistan at international level. He said though there is a conception in the country that polls riggings were committed in the general elections, but democracy is a continuous process of improvements. He hoped that the issues and shortcoming revealed during this polls process would be hopefully rectified in the next elections. He said though there were complaints of poll rigging at local level, but there were hardly any complaint of polls rigging at the state-level, which is a big achievement. He hoped that coming elections, due after five years, would give even better results and further augment democracy in Pakistan.

He said the case of NA-250 Karachi constituency has proved that the mandate of elite could not be ignored. He hoped that in the next elections they would not dare to disrespect the mandate of poor masses as well.

Nazir Leghari, editor Daily Jang, said after the English rulers left this country, the people continued to remain in a tight grip of cruel establishment, albeit their color was not fair but black. He said this local establishment ruled the country with brutal force. He saluted Pakistan masses that they refused to give up and continued to fight for their rights. He said the present democracy in Pakistan is the fruit of the gallant struggle of Pakistanis.

Senior journalist Owais Tohid said there were a lot of negative speculation and conspiracy theories that the general elections 2013 would not be held in Pakistan; however the successful holding of polls has proved that democracy has already taken firm roots in Pakistan. He said PPF and FES arranged extensive training for electronic media professional for a period of six month to enhance their professional skills to cover the general elections in better manner. He said in regard regional and local TV channels were given main focus. He said these training paid rich dividends and the standard of these electronic channels to cover the polls remained very high. He said beside the mainstream media the social media also played a big role in disseminating information amongst people. He regretted that the province of Balochistan remained relatively ignored by the media as well as big political parties.

Senior journalist Idress Bakhtiar also lauded the performance of media to cover the general elections. He said in some grave cases of poll rigging particularly in Karachi the media preferred to remain silent as the risks were huge in the prevailing violence-infested political culture; however, the overall role of media was very positive. He hoped that in the coming polls the Pakistani media would play even more transparent and effective role.

On the occasion, certificates were distributed amongst the media persons who have successfully completed the training.