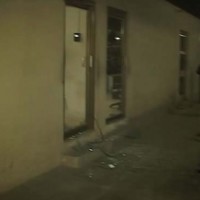 FAISALABAD (Dunya News) – Dunya News came under a grenade attack Friday from unknown assailants of banned organization as its Bureau office in Faisalabad was bombed, injuring three of its employees. The attack shattered windows, while cars and motorcycles parked outside were significantly damaged by the explosion. Threatening pamphlets were also dropped at the crime scene by the unidentified suspects.

Prime Minister (PM) Nawaz Shareef has taken notice of the onslaught and ordered the arrest of the culprits. Chief Minister (CM) Punjab also took notice of the grenade attack and has ordered a report to be submitted. CM Punjab has also ordered Regional Police Officer (RPO) Faisalabad to take immediate action against the act of terrorism and advised that the suspects involved be arrested within 24 hours.

Police, in its traditional manner, arrived late at the scene and now has started gathering evidence from the incident site.

Pakistan Federal Union of Journalists’ (PFUJ) President Rana Azeem has declared a state wide protest against the attack. He stated that Dunya News has always stood for the truth and he assured the cooperation of the journalist community.

In a talk with Dunya News, Karachi Press Club President Fazil Jamali expressed that the attack on Dunya News’ Bureau office was an attempt to silence the truth.

Federal Minister for Information Pervaiz Rasheed while talking to Dunya News stated that the government condemns the violent act and assured that the culprits will be brought to justice on immediate basis.

Spokesperson for the PM Musadiq Malik stated that an attack on journalists was an attack on democracy. He stated that strict action shall be taken against those involved and that PM Nawaz has also given the order for the arrest of the suspects.

A nationwide protest of the journalist community against the grenade attack on Dunya News was seen including Lahore, Multan, Quetta, Sahiwal and Khanewal along with numerous other cities. Protestors have called the terrorist act an attack on the freedom of press. Protesors chanted slogans against terrorism and have demanded an immediate arrest of those involved.