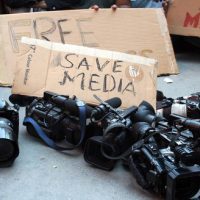 Six reporters representing different TV channels and newspapers were assaulted and then forcibly removed from Civil Hospital, Thul by doctors and other staff on September 13.  Thul is located in Jacobabad District in Sindh Province of Pakistan.

The reporters had reached the hospital to cover the visit of Justice (retd) Ameer Hani, Chairman of the Water Commission.  While waiting for him to arrive the reporters were approached by patients admitted in the hospital and their family members. They started telling the journalists about conditions in the hospital such as shortage of staff and medicines.

After taking the views of the patients, the journalists than went to the office of Dr. Asif Laghari, Medical Superintendent and started asking him questions about conditions at the hospital. According to the journalists, Mr Laghari expessed displeasure at the questioning and refused to give answers. Other doctors who were also present in the office started beating the journalists and forced them to leave the hospital.   The journalists received injuries as a result and had to be taken to hospital for treatment.

One of the doctors also lodged a complaint against the journalists and they have been booked under the Anti-Terrorism Act (ATC). No arrests have been made as of yet.

Lala Asad Pathan, Assistant Secretary General Pakistan Federal Union of Journalists (PFUJ), told Pakistan Press Foundation (PPF) that PFUJ will protest outside the office of SSP Jacobabad against the attack on journalists and the case registered against them.