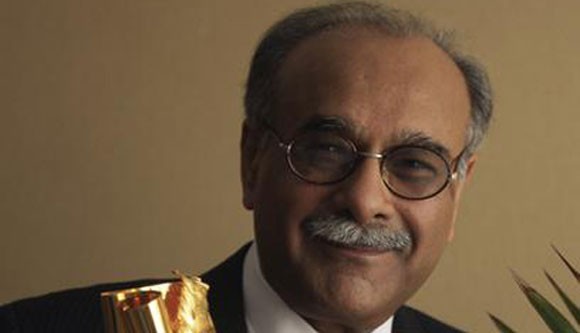 ISLAMABAD: Supreme Court’s Register Dr Faqir Hussain has filed an Rs 300-million damages suit in the Islamabad District Court against senior journalist Najam Sethi for publishing a news story in his weekly magazine against him.

The SC registrar on Saturday filed a suit under the Defamation Ordinance 2002 through his counsel Mian Gul Hassan Aurangzeb against Najam Sethi and his publication The Friday Times. He requested the court that the suit may be decreed with costs. He also pleaded that Sethi should be permanently restrained from writing and publishing any defamatory material against him and should be directed to withdraw the “defamatory article against the SC Registrar”.

On September 24, 2012, the plaintiff (Dr Hussain) was informed about a story published about him in The Friday Times of August 17-23, 2012. The plaintiff read the said story on the same day, which was titled “Tip of the iceberg”, under a general heading “Such Gup” (hereinafter referred to as the “defamatory story”). The story, which has offended the SC registrar, reads: “The Tony affair is just the tip of the iceberg, we hear. The contagion seems to have spread to other officials associated with the hallowed halls of justice. It is rumoured that the gent who’s supposed to register all and sundry has also been the recipient of the Town Tycoon’s largesse to the tune of two houses.”

The SC registrar contended that the story is suggestive of him being the recipient of two houses from the “Town Tycoon”, which is an obvious reference to the former Bahria Town chairman, Malik Riaz Hussain. The use of the word “contagion”, which means “spreading of disease by contact; corrupting influence”, in the story is suggestive of the plaintiff, (on account of holding the office of Registrar of the Supreme Court of Pakistan), being involved in some sort of corruption by receiving two houses from the “Town Tycoon”.

“It does not require much imagination for any reasonable person to gather the basic and fundamental intent of the defamatory story i.e. to defame, damage and traduce the plaintiff, to tarnish his high stature, and to lower him in the estimation of all those who have read the defamatory story. The allegations and accusations made in the defamatory story against the Plaintiff are libelous and defamatory, and, therefore, an actionable wrong,” the SC registrar has contented.

The counsel also submitted that the plaintiff had purchased two eight marla houses in Bahria Town, Islamabad. One house was purchased by the plaintiff, in the name of his son, for valuable consideration in the open market from an allottee, and the other was purchased from Bahria Town at the market rates. The lawsuit contends that the SC registrar’s ownership of these houses is not the consequence of any “largesse”, “as wrongfully, rather maliciously alleged in the defamatory story”. “The bare perusal of the defamatory story shows the bias and venom the defendants have against the plaintiff.”

“The false and baseless aspersions cast on the plaintiff in the defamatory story render the defendant, jointly and severally, liable to pay damages to the plaintiff and furthermore obligated them to retract and withdraw the false insinuations.” Dr Hussain has also contended that the text and spirit of the “malicious and defamatory” story indicates the defendants’ sinister objective to cause a loss and disrepute to the plaintiff.