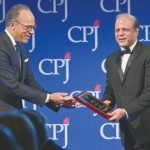 NEW YORK: Dawn Editor Zaffar Abbas received the prestigious Gwen Ifill Press Freedom Award for 2019 on Friday for his “extraordinary and sustained achievement in the cause of press freedom”.

The award is named after Ms Ifill, the first woman of African descent to host a nationally televised news show in the United States.

American journalist Lester Holt, an internationally recognised NBC news anchor, presented the award to Mr Abbas at a ceremony in New York. “There could be a no more deserving recipient than Zaffar Abbas,” Mr Holt said. The Committee to Protect Jour­nalists (CPJ) announced Mr Abbas as the recipient of the award in July.

“For me, and hopefully for many others in the profession, capitulation is not an option,” said Mr Abbas while accepting the award, which is administered by the New York-based CPJ. “This award is for all of us and more than that for our fallen fellow journalists.”

Thanking the CPJ for this honour, Mr Abbas said: “You are not just honoring me. You are adding a meaningful voice to the cause of media freedom in my country.”

Kathleen Carroll, chair of the CPJ board, said: “Zaffar Abbas is the embodiment of journalistic courage, which is why the board is so pleased to honour him with the Gwen Ifill Press Freedom Award.”

Mr Abbas said: “I need to thank particularly the Dawn team that I am privileged to lead, for standing tall and doing its job, without flinching, through financial hardships and threats, and the Dawn management for backing our editorial independence.”

Reflecting on his professional journey that led to this endorsement, he also thanked his “most significant co-traveler”, his wife Tasnim, who, he said, was “the most formidable pillar of support through the peaks and troughs of my career”. He also thanked his daughter Paras and immediate and extended family “that has stood by my”.

Mr Abbas started his journalistic career in 1981 as a junior reporter for The Star, a Karachi-based newspaper. In 1988, he started working with Herald magazine as an investigative journalist and later joined the BBC as the network’s Pakistan correspondent in 1992.

He covered the insurgency and civil war in Afghanistan during the Soviet occupation, post-9/11 events and their impact on the region which included the rise of religious extremism.

“I have spent almost 40 years trying to tell the truth. Surrender is not journalism, reporting the truth is,” Mr Abbas said.

The CPJ said the award, previously known as the Burton Benjamin Memorial Award, was renamed in 2017 to honour Ms Ifill, a veteran journalist and former board member who died in 2016.

Notable recipients of the award include Alan Rusbridger, former editor-in-chief of The Guardian, who was awarded in 2012; The Associated Press’s Kathy Gannon, who was the recipient in 2015; and CNN’s Christiane Amanpour who received the award in 2016.

A brief CPJ statement observed that at a time when journalists and media in Pakistan were facing extraordinary pressure, Zaffar Abbas continued to be a vocal supporter of steps taken to keep journalists safe. In 2015, he was elected as the chairman of Editors for Safety, a body of editors who work to provide protection to journalists facing threats.

“Every day he fights to deliver facts to Dawn’s readers in the face of pressure, obstacles, and blockades from the institutions in Pakistan that would much prefer to go about their business without scrutiny from the press or the public,” CPJ chairperson Carroll added.

The CPJ recalled how Mr Abbas has been subjected to intimidation and physical torture more than once in his career. He and his brother were attacked at their house by armed men in 1991 when he reported on the activities of the Muttahida Qaumi Movement. The report included direct quotes from its leader’s speech that the party did not like.

A few years later, when he was working at the BBC, the network’s office in Islamabad was set on fire by militants and Mr Abbas and his colleagues were physically assaulted. The violence was said to be a reaction to two videos broadcast on the BBC regarding sectarian killings in the country.

The CPJ recalled that in recent years, Dawn has come under increasing pressure and its circulation has been disrupted in several cities on multiple occasions after the paper published an exclusive report in 2016 pertaining to relations between the civil and military leadership.

The CPJ statement, quoting Mr Abbas, said that he and the reporter of the news story were subjected to hours of interrogation by members of intelligence agencies but refused to reveal their sources.