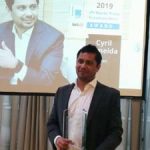 ISLAMABAD —  Abbas Nasir, a former editor of Dawn, revealed in his column on Sunday that Cyril Almeida had parted ways with the paper.

“I feel burdened with sadness but wish him the best as he explores new, exciting frontiers,” he wrote.

In September Almeida had made a comeback to the editorial pages of Dawn, after almost eight months.

Nasir was all praise for Almeida. “The confident young man, a Rhodes Scholar who read law at Oxford, was introduced to me by a colleague when I was editor. I remember asking him that while he wished to be a print journalist was he aware of what print journalists make? He smiled and said I was overestimating what lawyers make in Pakistan.”

Nasir wrote that Almeida was so gifted and worked at such speed that he became an editor’s, any editor’s dream.”

He hoped that Almeida returns to Dawn one day as editor.

Later, Almeida announced on Twitter that he had quit Dawn and ended his Sunday column. He said a break from the media was likely.

Dawn’s current Editor, Zaffar Abbas in a tweet, said that he was extremely  saddned to see Cyril go. “He was one of the brightest stars of Dawn, & Pak journalism, and one of the most honest & bold writers I have worked with. He’ll be greatly missed.”

Almeida was involved in controversies that led to court cases against him. In October 2016, his story on the meeting of National Security Committee caused an uproar. Although the then PMLN government rejected the story, the authorities briefly put his name on the exit control list.

In May 2018, Almedia’s interview of Nawaz Sharif led to a treason case against him and Zaffar Abbas, editor of Dawn.

Sharif maintained that the militant organizations were active in Pakistan and asked: “should we allow them to cross the border and kill 150 people in Mumbai? Explain it to me. Why can’t we complete the trial?”