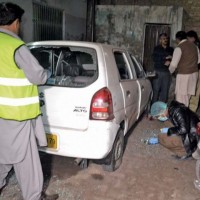 SARGODHA: A small home-made explosive device (cracker) was hurled at the offices of Express Media Group on Monday evening with the resulting blast injuring a security guard and damaging a number of vehicles.

At least two unidentified men riding on a motorcycle had approached the Express office on University Road at about at about 5:15pm in the evening and hurled the cracker over the closed gate before fleeing. It exploded with a loud bang and the ball bearings within injured security guard Sher Muhammad, and damaged a door, an office van and a number of parked motorcycles.

Rescue 1122 rushed to the spot soon after the explosion and took the injured guard to hospital for treatment. The bomb disposal squad was also summoned to the spot.

Shortly after the attack, DPO Sarghoda Sajjad Hassan Manj and DCO Saqib Manan visited the Express Media Group office and issued orders to depute a police detail outside the office.

A case of the attack was registered in CTD Faisalabad police station with articles relating to terrorism included in the FIR.

Advisor to the Chief Minister Rana Maqbool Ahmed and IG Punjab Mushtaq Sukhera have also demanded reports of the incident within 24 hours.

Meanwhile, a joint investigation team (JIT) consisting of officials from Counter Terrorism Department (CTD) and the district police has been set up under Khalid Ranjha of the CTD and DSP City Rana Ghulam Murtaza to probe the attack.

Journalist unions and organisations have condemned the attack and have announced a protest for Tuesday (today).