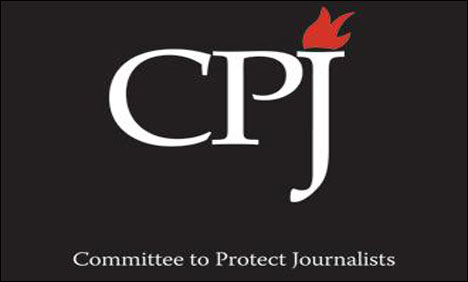 NEW YORK: The Committee to Protect Journalists, an independent watchdog body, condemned Monday’s attacks on two media houses in Karachi – Nawa-i-Waqt media group and Aaj TV – and called on the authorities concerned to bring the perpetrators to justice.

“We condemn these latest attacks in Karachi and call on the government to ensure safety of journalists and media workers,” CPJ Asia Programme Coordinator Bob Dietz said in a statement. Unidentified assailants on a motorcycle had hurled explosives at the offices of Nawa-i-Waqt media group and Aaj TV, which are half a mile apart in Guru Mandir area, but there were no casualties.

Past investigations into anti-press violence in Pakistan lacked credibility, and perpetrators have rarely been brought to justice, CPJ, the New York-based body, pointed out.

CPJ ranked Pakistan eighth on its 2013 Impunity Index, which spotlights countries where journalists are murdered and their killers go free.

INP adds: One hundred and thirty-four journalists and media support staff were killed while on reporting assignments last year, with Pakistan fifth on the list of countries with nine deaths, the London-based International News Safety Institute (INSI) said. Most of those killed were targeted deliberately. Of these, 65 died covering armed conflicts – primarily in Syria, where 20 were killed, and Iraq, where the death total was 16 – while 51 were killed in peacetime covering issues like crime and corruption, and 18 died in accidents.

After Syria and Iraq, cited by the institute as the most dangerous countries for journalists last year, came Philippines with 14 deaths, India with 13 and Pakistan with 9.

The total was down from 152 deaths recorded in 2012, but there was an accompanying rise in assaults, threats and kidnappings directed at journalists which largely go unreported, said the INSI study, “Killing the Messenger.” The institute, funded by major world news organisations including Reuters, has been issuing the report since 1996. Its main work is providing security training for journalists reporting in dangerous situations.

INSI said local journalists were the main victims, with 123 of the dead while covering their own country. Of the 20 who died in Syria, 16 were Syrian nationals.

“Most journalists were targeted, and shooting was the most common cause of death,” INSI said. The report, compiled for INSI by the Cardiff School of Journalism in Wales, showed 85 of the victims were shot.

Others died in explosions, stabbings and beatings, under torture or by strangulation, or in accidents, according to INSI. In 2012, 28 reporters died in Syria, 18 in Somalia, 12 in Nigeria, 11 in Mexico and 11 in Pakistan.