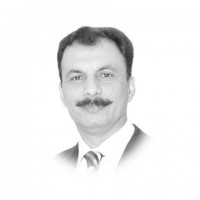 I say to you: we are in a battle and that more than half of this battle is taking place in the battlefield of the media

Radio signals reach where neither TV signals are available nor newspapers may be delivered. Therefore, for both state and non-state actors, radio assumed vital importance.

In remote, backward areas, the youth only has access to radio. The mushrooming proliferation of mobile telephones having inbuilt radio facilities has further increased the popularity of radio.

Globally, owing to an increased popularity of radio, leading telecom companies have started their own radio services. During the last two decades, the telecom sector successfully intruded into the banking sector and now it is also attempting to capture space in the broadcasting sector.

Radio covers 98 per cent of the area of Pakistan; thus it has the potential to be an effective medium in the war against extremism.

Since rural areas offer fewer entertainment opportunities, radio is the only instant and cheap medium of entertainment. To respond to the challenge of extremism, ‘infotainment’ can be an effective technique that the broadcasting industry can utilise. In our scenario, the broadcasting sector should specifically focus on individuals between the age group of 9 to 20.

Realising the currency of broadcasting, leading broadcasting companies such as BBC, Voice of America (VOA), VOG and China Radio International expanded external broadcasting network. By doing so, such radio networks are trying to feed their agenda in the language of the target audience.

Technology multiplied the importance of mass communication, hence radio is an electronic carpet of sorts, being effectively used by the extremist organisations in different parts of the world.

Though radio can be very effective in countering extremism, local broadcasters are yet to use radio signals for this purpose. The clergy — although seemingly averse to technology — aptly realised the effectiveness of radio.

Prior to operation Rah-e-Rast in Malakand, a cleric used the means of broadcasting to his maximum advantage. He tried to promote ill will against the state. The youth and women were prime targets of his fierce, live sermons. For his emotional speeches via illegal FM radio, he was popularly known as ‘Maulana FM’. Undoubtedly, by using radio signals he gained power and influence.

Owing to cheaper availability of radio station equipment, it is difficult to control the proliferation of illegal radio stations. Confiscation of equipment is not the solution, but rather as per essence of the National Action Plan, requires capacity-building of broadcasters and tailoring of long-term broadcasting policy.

Once upon a time in this part of the world, the state had an exclusive monopoly over airwaves, but liberalisation and restoration of the democratic order persuaded the state to make space for the private sector to invest in broadcasting.

Liberalised broadcasting policies promoted infotainment and gave birth to “back-to-back music”. This, however, compromised the role of broadcasting in counter-extremism and counterterrorism. Owing to its unique characteristics such as low cost, portability, availability of radio signal in far-flung areas and language diversity, the radio can play an effective preventive role in countering extremism and accelerate de-radicalisation processes.

Though the radio informs listeners of the incidents of terrorism via news bulletins, there are hardly any educational endeavours to counter extremism. Radio must inform and educate the listeners on how to identify facilitators and financiers of terrorism.

Since most of our law-enforcement agencies operate without the backup of professional public information units, an information void is created, which results in reporters opting for exaggerated figures and giving their own slant to incidents.

In Pakistan, mass communication experts are yet to explore how extremist organisations tailor their media strategies and how they achieve their objectives through mass and social media.

Whether it is peace or wartime, state and non-state actors always try to manipulate public opinion. Apart from the use of force and psychological warfare, it is media strategies that are commonly used in times of civil unrest and insurgencies.

Extremist organisations like the TTP, the IS and al Qaeda hired experts well versed in the art of influencing public opinion. They concentrate on how to touch on emotions, poison minds, attract potential talent for enrolment for the furtherance of their missions and win the sympathies of financiers and facilitators.

In Afghanistan and Iraq, they tried to glorify the concept of the ‘caliphate’, thus challenging the very existence of the modern nation-state system. Countering such a strategy requires clarity on the part of states. Clarity of the state enables the broadcasters to knit a counter-narrative. In most cases, counter-narrative communication is reactive. The effectiveness warrants that counter-narratives are to be supported along with the negative impact of the agenda pursued by extremists.

During the ongoing spell of militancy, Pakistan lost thousands of innocent souls, but our broadcasters are yet to inquire as to why it was that innocent Pakistanis shielded the rest of the world from the wrath of savages.

Before knitting a broadcasting strategy, it is essential to understand how the narrative of extremists influences the understanding and behaviour of their followers.

Radio must share the stories of the victims of terrorism and focus on how to deter the youth from the vicious cycle of extremism. Radio can effectively educate the listeners about the historical and geographical dynamics of extremism. Although radio breaks the news of drone attacks, it hardly apprises the audience about the nature of the area, people and what led to such a technological option.

In the context of extremism, it’s not solely the mass medium that will enhance effectiveness of the narrative, but rather the quality of the message and public stature of the messenger.

Realising the importance of external services, international broadcasting organisations like VOA and BBC invested in Pashto service and tried to capture the audience. Our broadcasters, on the other hand, are yet to contextualise the issues of the war against terror.