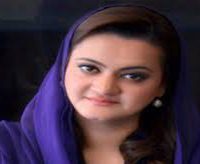 ISLAMABAD: Federal Minister for Information & Broadcasting Ms Marriyum Aurangzeb said democracy in the country would not gain strength in an oxygen tent and the government could not be run when it was made dysfunctional and paralysed. She was speaking in the Senate in regards to clash between the police and journalists on Thursday.

Marriyum said she had presented interim report about the incident in the House and the final report would be presented later identifying the people responsible for the episode.

The minister said freedom of speech was being granted by choice notwithstanding the fact that it was not a choice but a fundamental right. She said the most heinous censorship in the history of the country was in vogue at the moment, difference of opinion was being stifled and certificates of patriotism were being awarded by choice.

Marriyum said people were also subjected to mental torture and freedom of speech was allowed selectively. The minister further said the democratic voices were being gagged, opinions of civil society were being suppressed and the articles contributed by the journalists were not being allowed to be published. She said even the voice of the thrice elected prime minister was often muted.

Marriyum said when Bhutto was sent to gallows, the newspapers came out with blank pages. She said the difference after 40 years was that the newspapers were made dumb and the TV channels were being silenced.

Marriyum said she as Information Minister felt ashamed over the permeating situation and had mulled over the prospect of resigning several times. However, she observed that for how long they would continue to resign out of fear and helplessness and prime ministers would continue going home? She asked as to why that phenomenon could not be resisted collectively?

The minister said the situation was so grave that even an article by former Senator Afrasiyab Khattak was not allowed to be published.

She said there were also attempts in the offing to divide the media. The minister lamented that her name was excluded from the committee formed to select chairman Pemra saying that she would be busy in issuing statements therefore she should be removed from the committee.