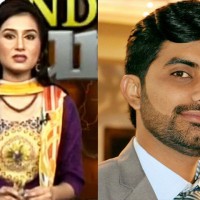 The incident took place at Pakistan Institute of Medical Sciences (Pims), where FIA officials had brought Hijazi for a medical check-up following the dismissal of his pre-arrest bail plea earlier in the day.

When Hijazi arrived at the hospital, Channel 24reporter Saba Bajeer took some photos of the SECP chairman using her cellphone and inquired about his health. At this, FIA Assistant Director Tahir Tanveer approached Bajeer, grabbed her by the arm and asked her to delete the photos captured by her, according to an application filed by DawnNews reporter Aitzaz Hassan for legal action against the harassment.

The FIA official then started pushing Hassan, on whose suggestion Bajeer had proceeded to delete the photos. Hassan’s mobile phone and cards were then seized in the presence of 6-7 FIA personnel.

The FIA personnel then forced Bajeer and Hassan into a room at Pims, where they were illegally detained for an hour without their phones.

Meanwhile, the SECP chairman’s family members together with FIA officials manhandled other media representatives who had gathered by then to rescue their colleagues. The two reporters were let go after journalists started a protest against FIA’s actions.

Several police officers also reached Pims along with a police contingent to bring the situation under control.

The journalists have urged police in an application to take legal action against FIA officers and personnel for manhandling and illegally detaining them.