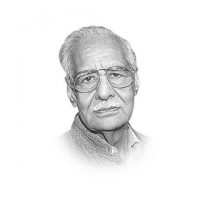 The press has been able to consolidate its freedom after several struggles. And today it is generally free from government pressure. There are still other forces which do not allow it to be completely free. Yet among all the democracies in the world, the Indian press is considered independent.

The electronic media is to a large extent at the mercy of estate owners who earn money through property dealings and spend it on maintaining a TV channel or two. This cannot be, however, said about the print media with certainty.

When it comes to films, the pressure of the government is relentless and visible. Every film has to have censor’s certificate. When the freedom of expression has been guaranteed by the Constitution, it has been for all, for all modes and methods. The requisite of censor’s certificate curbs freedom.

Why the filmmakers have never made it an issue is beyond me. It is still not too late to do so. Sanjay Leela Bhansali’s film can be the rallying point. He has preferred to face the consequences. He was attacked in Rajasthan where he was shooting the film. Yet he has stuck to his guns.

Radical Hindus in Rajasthan have broken furniture and set it on fire in one of the cinema halls in a town of the state. Most of the liberal voices are conspicuous by their silence. Bhansali must be feeling lonely. Whether the film Padmavati, which he has directed, is based on fiction or fact is not the point at issue. It is Bhansali’s determination to screen it. He gets full marks for his resoluteness.

Not many film directors will emulate his example because of the huge money at stake. The financers will hesitate to invest. They are interested on returns not the principles which Bhansali has pursued caring little about the fallout. At present, a good film has become a victim of chauvinism.

The worst part is that the whole thing has been politicised. The ruling Bhartiya Janata Party (BJP) is backing the anti-Bhansali elements. For them, the film is an attack on Hindutva and must be stopped from screening. Bhansali has been described as a leader of the anti-Hindu group. Nobody is there to explain why he becomes anti-Hindu because of his film and why he would be a proud Hindu if he gives up the effort to produce Padmavati.

It is surprising that the top leadership of the BJP is maintaining silence and not coming down hard on these people who are carrying out lawless activities by taking stern action against them. It should realise that all the gains of ease of doing business will get dissipated if this type of activity is allowed to go on. Investment in India which is what the government is desperately seeking will not take place in light of these actions.

Many years ago, the famous film producer and director Gulzar faced a similar situation. His film Aandhi was drastically censored before it was screened. It gave, however, a message to the people who were against then prime minister Indira Gandhi’s autocratic rule.

Probably a third force, which is neither communal nor authoritarian, is the answer. It is not yet even on the horizon. Bihar Chief Minister Nitish Kumar is probably the answer to such questions raised. But if he were to leave Bihar, the space comes to be occupied by Lalu Prasad Yadav and his family, not a good choice.

The most important aspect is the ownership of newspapers, television and radio by the same house or individuals. Even America has some kind of control over cross-ownership. But there is no such bar in India where it is like putting up yet another factory.

True, the media has come a long way. Still current annual report of the Press Council of India is helplessly demanding the television channels to come under its purview. The rulers continue to turn a deaf ear to what is asked.