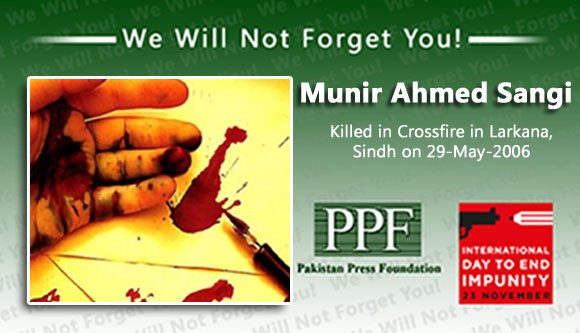 A camera operator in southeast Pakistan’s Sindh district has been killed while covering a gunfight between tribesmen near the town of Larkana, report the Pakistan Press Foundation (PPF) and the Committee to Protect Journalists (CPJ).

On 29 May 2006, Munir Ahmed Sangi of Kawish Television Network (KTN) was shot dead in the middle of a fierce gunfight between members of the Unar and Abro tribes. At least one other person was killed in the clash, which Sangi recorded before he died. KTN broadcast his video.

Local police said Sangi was killed in crossfire. However, some of Sangi’s colleagues believe he may have been deliberately targeted for the station’s reporting on a meeting of Unar tribal leaders, notes CPJ. An uncle and colleague of Sangi had recently been attacked in connection with KTN’s reports that two children had been punished by a tribal court. PPF reports that police have arrested close to 30 suspects.