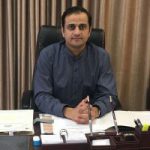 He said that PTI had forgotten the fact that media is the fourth pillar of the state. Talking to media persons at media corner of Sindh Assembly on Friday, the Adviser also condemned them for closing Chhachhro Town on the arrival of Prime Minister.

“Our foreign minister gifted wheat to Afghanistan but done nothing for the relief of people of drought hit Thar in their hard time,” he criticised. The adviser to CM said that PTI carvan has reached Tharparkar only for a political leader.

The provincial adviser said that people were being shown pleasant dreams to deceit. He said that rulers have no time for resolving the issues of common men and added that they (PTI)  were only interested in blaming opponents. He said that finance minister not ready to answer the reason for increase in dollar rate , while federal board of revenue failed to collect Rs. 250 billion.

To a question, he said that federal government has done nothing for Karachi, adding that green line project could not be completed so far. Replying to question on action against banned outfits, Barrister Murtaza Wahab thanked media for the cooperating with Sindh government and added that 52 facilities of JuD and FIF, while 4 of JeM has been taken over by Sindh government. He said that Sindh government will manage these facilities.