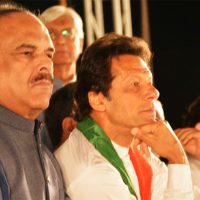 The official media wings of the federal government, including Associated Press of Pakistan, Press Information Department and Pakistan Television, were not invited to cover engagements of Imran Khan.

Also, the provincial information department and media staff of the Chief Minister’s Secretariat were not allowed for coverage.

Officials of the provincial information department and PID referred the matter to the PTI’s media team.

“There is no need for deployment of local staff to cover the prime minister’s visit because media team has come from Islamabad,” said an official of a state-run media outlet.

“And it happened for the first time to bar official media from the coverage of the premier’s visit to the provincial capital,” he said requesting anonymity.

It came as a surprise for local media, who were invited to openly cover each and every activity of the PTI chairman before his election as PM.

The private TV channels and newspapers have already been sidelined. Media was not invited for coverage of important events like oath-taking ceremonies of the governor and the cabinet.

“This is first step towards controlling media in Pakistan,” he said, adding that many elected leaders dubbed media as their enemy but the PTI silently ignored them, which was the first step to muzzle the press.

Imran Khan, soon after landing at the Bacha Khan International Airport, attended an official huddle at the Chief Minister’s House, which continued for around two hours.

Currently, the provincial cabinet has no information minister.

At the end of the premier’s tour, there was no official statement about his meetings with the party and cabinet members that discussed vital issues.

After the departure of the prime minister, the PID and the provincial information department were unable to feed the media about decisions taken in the meetings.

Mr Yousafzai, a former journalist, told Dawn that teams of the official media had accompanied the prime minister from Islamabad and therefore, the local staff of APP and PID was not invited to cover the visit.

The News International: Freedom of expression being stifled: Farhatullah