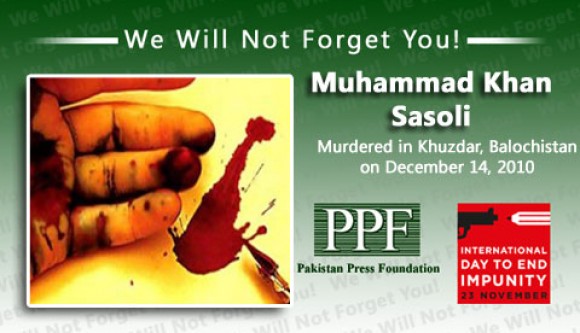 Mohammad Khan Sasoli, a correspondent with Daily Balochistan Times and DawnNews TV, and president of the Khuzdar Press Club, was shot dead in Khuzdar, Balochistan province, in Pakistan’s south-west, on December 14.

The Pakistan Federal Union of Journalists (PFUJ), an IFJ affiliate, reports that Sasoli was shot by two unidentified motorcyclists as he stepped out of his car, after returning home from the press club. He was taken to hospital by his family after sustaining bullet wounds to the head and chest, but died before he could receive medical attention, according to local media reports.

The motive for the killing was not clear.

“Balochistan has become a notoriously dangerous location in which to work as a journalist, with a death toll for 2010 that surpasses most countries,” IFJ Asia-Pacific Director Jacqueline Park said.

“Of grave concern is the shameful lack of action by authorities to investigate these murders and bring those responsible to justice.”

Faiz Mohammad Sasoli, a former president of the same press club, was murdered in similar circumstances on June 27. Journalists in Khuzdar claim that all members of the club face threats from militant Baloch autonomy movements, the PFUJ reports.

No arrests have been made for the murder of Faiz, or the abduction and murder of Abdul Hameed Hayatan, whose body was found near Turbat in Balochistan on November 18. Hayatan was allegedly abducted by state security agents before his death.

“The IFJ supports the demands of the PFUJ that the Government of Balochistan dedicate all necessary resources to arresting and punishing the killers of these journalists, and bring an end to impunity for media killings,” Park said.

Mohammad Khan Sasoli is survived by his wife and son.