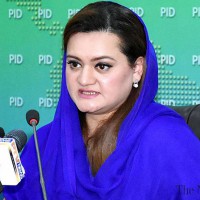 ISLAMABAD: Minister of State for Information Marriyum Aurangzeb has condemned the attack on a DSNG van of a private news channel in Faisalabad on Tuesday.

In a statement, she said no restriction can be imposed on Media in the country and the democratic government firmly believes in freedom of expression. She said attacks on Media will not be tolerated.

She said Media has the role to bring about truth and transparency. Marriyum Aurangzeb said action will be taken against those who violated law.—NNI