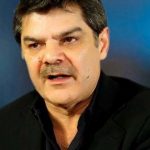 ISLAMABAD: An additional district and sessions judge of Islamabad on Friday issued non-bailable warrants of arrest for TV anchorperson Mubashir Luqman in a criminal complaint filed against him by Anwar Aziz, father of ex-minister Daniyal Aziz, for allegedly using slanderous language.

The court also issued arrest warrants for Luqman’s guarantor Rehan Ishfaq as Luqman who was on pre-arrest bail in this matter remained absent in three consecutive court hearings.

In a broadcast, Luqman passed certain remarks against the personal life of Aziz in 2016.

In response, Aziz filed a criminal complaint against anchorperson seeking action against him under the Pakistan Penal Code.

Luqman was attending the court proceedings, however, since he remained absent for three consecutive dates, the judge issued arrest warrants for him as well as against his guarantor. The court issued the non-bailable arrest warrants for them through station house office (SHO) police station Kohsar.

The court put off further proceeding till Jan 22 and directed the Kohsar SHO to produce Luqman on the date. The court warned the SHO for legal proceeding if the warrants were not executed.