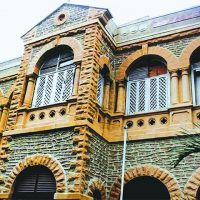 KARACHI: Several gunmen in plainclothes entered the Karachi Press Club (KPC) late on Thursday night and harassed journalists, according to a statement issued by the KPC’s office-bearers.

“Dozens of gunmen in plainclothes entered the KPC at 10:30pm, harassed journalists, examined different rooms, kitchen, upper floor of the building and sports hall. They forcibly made videos and took pictures with mobile cameras.”

The incident caused concern among journalists and when some of the KPC members inquired about them, they did not get any satisfactory reply.

The armed men came in at least six double-cabin vehicles, land cruisers, Prado and other vehicles, besides a police mobile.

The KPC office-bearers immediately informed Additional IG Karachi, Dr Amir Ahmed Shaikh, about the incident. He assured them of an immediate inquiry.

The club’s president, Ahmed Khan Malik, and secretary Maqsood Yusufi termed it a violation of sanctity of the club and urged the governor and the chief minister of Sindh to order an inquiry and take action against the “intruders”.

Journalists have called for a protest on Friday afternoon against the incident.