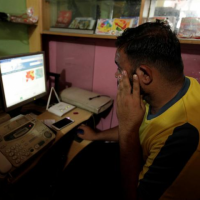 KARACHI: Amnesty International has criticised what it claims is an “intensifying” crackdown on freedom of expression in Pakistan, according to an an annual report of the London-based human rights group released on Thursday.

The report has also condemned the use of the Prevention of Electronic Crimes Act 2016 to “intimidate, harass and arbitrarily detain human rights defenders for online comments.”

However, the assessment praises Pakistan for getting elected to the United Nations (UN) Human Rights Council in October last year, and for passing “historic” legislation recognising the people of the “third gender” on national identity cards.

According to Amnesty International, enforced disappearances in the country remain a wide-spread problem, as journalists and human rights defenders, as well as internet bloggers, bear the brunt of this clampdown.

The non-government organisation (NGO) paints a bleak picture of economic and social rights in the nation, noting that food security, labour laws, and the rights of women and refugees remain areas of considerable concern for the international community.

Non-profit group notes that “impunity is prevalent” in the country, as arrests made under the “draconian” Prevention of Electronic Crimes Act 2016 targetted journalists and workers of political parties critical of authorities, while “no action was taken against social media accounts belonging to armed groups that incited discrimination and violence.”

Denouncing the decision of the government which had ordered 29 international NGOs to halt their operations in November last year, Amnesty bemoaned the “shrinking space for the civil society to work independently in the country”.

Citing a National Nutrition Survey, Amnesty claims that around 58 per cent of households in Pakistan are food insecure, and that an estimated 44 per cent of children remain underdeveloped for their age. In a worrying evaluation, the group reported that a “significant percentage” of these lie in Federally Administered Tribal Areas and Balochistan.

The annual report criticses authorities for not enforcing legislation on labour rights, saying that “reasons for this include a lack of clarity regarding the law on the part of lower court judges and lack of action by police when complaints were filed”.

Amnesty has also called upon the government to address the gender pay gap and increase social sector spending for health and education.

The NGO has hailed as “historic” the legislative advance for the transgender community, wherein the government recognised those who wished to register as a “third gender” on national identity cards, and included them in the national census.

However, the London-based non-profit group has expressed its disappointment over a protection of minorities bill which has still not been ratified.

Labeling the 2016 law on honour crimes against women as “ineffective”, Amnesty has identified the loopholes in the judicial system which are exploited to undermine the legislation, revealing how “parallel and informal justice systems continue to undermine the rule of law”.

The report comes at a time of heightened political crisis in Pakistan, with the ruling party’s grip on power progressively weakening as its ministers face a barrage of allegations in a deepening probe into financial corruption.