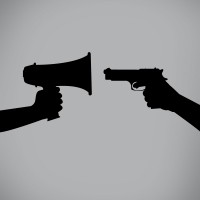 Law enforcement agencies of Pakistan succeeded in their efforts and have arrested alleged killers of Baloch journalist Irshad Mastoi and two his colleagues.

Balochistan Home Minister Mir Safaraz Bugti during a press conference at the Home Ministry informed media on September 2 that the arrested target killers had confessed to the killing of journalists in Quetta. He further stated suspects belonged to the banned Baloch Liberation Army (BLA).

He identified the killers as Shafqat Ali Rodani codenamedNaveed and Ibrahim Nachari codenamed Shah Jee. They were also involved in 31 cases of terrorist attacks, targeted killings, bomb blasts and other criminal activities.

In their confession statement, they gave details of the murder plot and objectives. According to Shafqat Ali, Ustad Aslamcodenamed Aucho was the mastermind of the plot and SohailMarri the facilitator.

Shafqat Ali said that they walked into the Online office, when he opened fire at Mastoi two other men at the office tried to stop him and he fired at them as well.

In his confession, Shafqat Ali also revealed that his group wanted to use the killing in their propaganda at the UN and other forums against intelligence agencies.

On 28 August, 2014, at about 7:45 pm armed men barged in the office of news agency Online and killed Irshad Mastoi, Abdul Rasool and Muhammad Younas by open fire at them. In the firing incident Mastoi injured critically and his colleagues died at the spot. Mastoi was immediately shifted to a hospital; however he succumbed to deadly wounds.

According to details, a firing incident took place inside Kabirwala Building located at the Jinnah Road, Quetta, a crowd and high security zone and the assailants managed to escape unhurt from the spot.

Mastoi was Bureau Chief of news agency Online, assignment editor of ARY News and also general secretary of the Balochistan Union of Journalists.

Abdul Rasool was a final year student of Mass Communication at Balochistan University. He had completed a three-month internship in the news agency and now working as a reporter.

Mohammad Younis was serving as an accountant in the news agency for a number of years.