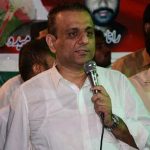 ISLAMABAD: A leader of the Pakistan Tehreek-i-Insaf (PTI) and member of the Punjab Assembly, Abdul Aleem Khan, is facing arrest after an anti-terrorism court (ATC) issued non-bailable warrants for his alleged involvement in the 2014 attacks on the Parliament House and PTV building.

ATC Judge Raja Jawad Abbas Hassan issued the warrants a few days ago — though the order surfaced on Friday — after the MPA failed to appear before the court in connection with the hearing of these cases.

Justifying Aleem Khan’s absence from the hearing, his counsel Shahid Naseem Gondal said that at the time when the ATC heard the two cases he [the lawyer] was representing Prime Minister Imran Khan in a case filed by Pakistan Muslim League-Nawaz leader Mohammad Hanif Abbasi in a Rawalpindi court.

The counsel said that by the time he reached the ATC it had already issued the warrants for Aleem Khan. His client would file an application for withdrawal of these warrants next week, he added.

On July 30, the court exempted them from personal appearance.

PM Khan had already been exempted from personal appearance in these cases.

After Mr Alvi took the oath as the president of Pakistan, his counsel had advised him to avail the presidential immunity. But President Alvi opted to pursue his case despite being the head of state.

Article 248 (2) of the Constitution states: “No criminal proceeding whatsoever shall be instituted or continued against the President or a Governor in any court during term of office.”

According to the prosecution, three people were killed and 26 others injured during the violence. It said 60 people were arrested. The prosecution submitted 65 photos, sticks, cutters, etc, to the court to establish its case.

The prosecution claimed that the protest was not peaceful and the accused sought bail after three years. Workers of the PTI and Pakistan Awami Tehreek marched on the Parliament House and Prime Minister House on Aug 31, 2014, and clashed with police deployed at Constitution Avenue.