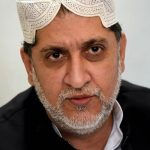 Talking to Geo News programme, the Baloch leader said the free press always acted as a bridge between the government and the people, adding that it conveyed the people’s issues to the authorities and the government’s decisions to the people.

He said it was possible that the government’s decisions are wrong and the people’s reactions both were negative or positive, but the free media plays its due role to build a bridge. Sardar Akhtar Mengal asked the government to immediately release Jang-Geo Group Editor-in-Chief Mir Shakil-ur-Rahman, and other political prisoners, kept in isolation and torture cells. He said it was unfortunate that whoever comes to the power, they always tried to curb the media: like those in the past and now the incumbent government. The chairman BNP (Mengal) said the government’s action against the media would compel the nation to recall the dictatorial regimes. Mengal said the government should not just seek appreciations but learn to tolerate criticism too. He said the incumbent rulers should draw lesson from their predecessors who are now regretting their tenures. Mengal said the government must avoid those actions that they have to repent in future.