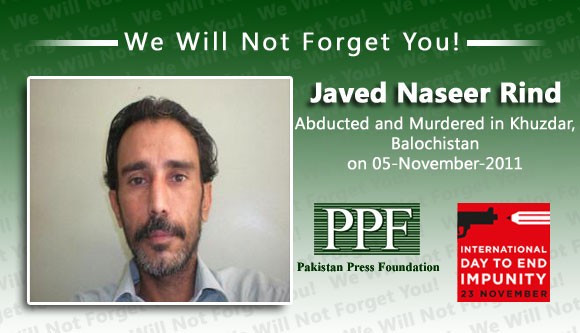 Javed Naseer Rind, a senior sub-editor and columnist with the Urdu-language Daily Tawar, was found dead on November 5 near Ghazi Chowk, in Khuzdar, in central Balochistan.

Rind disappeared from his hometown Hub in southern Balochistan on September 9. His body was found with torture marks and multiple gunshot wounds. It is not yet clear whether his death relates to his work as a journalist.

The discovery of the body of Rind, who was also a member of the pro-independence Baloch National Movement (BNM), comes after seven other abducted Balochi nationalist activists’ bodies were found on November 3 and 4, according to local news reports.

The Balochistan Union of Journalists (BUJ), a PFUJ affiliate, made repeated calls for Rind’s release after his disappearance and are now calling on authorities to conduct a full investigation into his abduction and murder.

“Authorities must act swiftly to end this cycle of violence and impunity in what is statistically one of the most dangerous places in the world to be a journalist,” IFJ Asia-Pacific Director Jacqueline Park said.

“The IFJ supports calls for an immediate inquiry into the death of Javed Naseer Rind, and all other journalists abducted, tortured and killed in Balochistan.”

At least two other journalists have been killed in Balochistan this year. Ilyas Nazar, a journalist with the Baloch-language magazine Darwanth, was found dead in Pidarak, Balochistan, on January 5. Like Rind, Nazar had been killed by a gunshot wound to the head, and his body bore signs of torture.