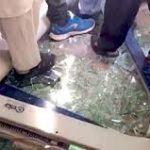 The International Federation of Journalists (IFJ) on Thursday expressed concern over last week’s attack on the office of Geo and Jang media group in Karachi. “The IFJ expresses its concern over the actions of protesters who attacked the Geo-Jang media group and the lack of police presence as this publicized protest turned violent,” it said. […]