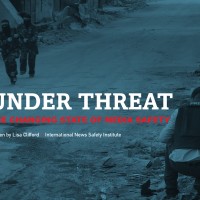 April 29 – Journalism has never been more dangerous and journalists have never felt more unsafe, according to the findings of a major report published today by the International News Safety Institute.

Under Threat: The Changing State of Media Safety provides an in-depth, multi-media look at the main changes in the journalistic safety landscape over the past decade. It does this through more than 30 interviews with journalists who work in some of the world’s most dangerous places and the news executives who make the difficult decisions to deploy them.

These interviews were supplemented by a survey of nearly 200 media workers around the world and 10 years of INSI statistics on journalist casualties, revealing the most deadly countries to be a media worker.

“In 2003 we published Dying to Tell the Story, which paid tribute to those journalists killed in the early stages of the Iraq war. After witnessing the horrific murders of our colleagues in places like Syria and Iraq, the insecurity in Ukraine, and the rampant impunity that accompanies the killings of most journalists, INSI felt compelled to look at how different media safety was from a decade ago,” said INSI Director Hannah Storm.

“In an industry under threat from so many different sides, we wanted to know what the main changes and challenges were and what if anything had stayed the same. The results of our research were substantial and deeply sobering.”

The INSI report reveals that:

Journalism has never been more dangerous, and journalists have never felt so unsafe.

Terror groups are using new technologies to control the “information battlefield” and have declared war on journalists.

The frontlines in places like Syria and Iraq have become unclear, meaning journalists don’t know who to trust and where they can go safely.

For their part, news executives aren’t sure who to turn to for information and help when reporters go missing or get hurt in today’s chaotic conflicts.

Technology helps journalists deliver their messages, and in some situations is keeping them safer, but makes them increasingly vulnerable to the powerful entities that seek to track and harm them.

The advent of user-generated content has blurred the role of journalists and confused the industry and general public alike.

Audiences more than ever expect to be instantly and accurately informed about even the remotest corners of our world – pushing journalists into ever more dangerous places.

The post Under Threat: Journalism has never been more dangerous according to major new INSI report on media safety appeared first on Pakistan Press Foundation (PPF).